ALL OF ME: Jennifer Lawrence captivates in gritty spy thriller Red Sparrow 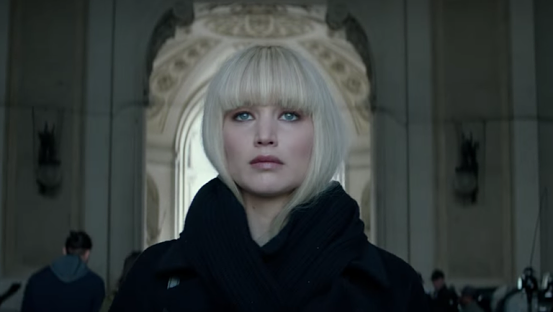 CHAMELEONIC actress Jennifer Lawrence excels at portraying tough cookies grappling with unforeseen circumstances that bring serious life-altering consequences. These heroines are often fearless fighters whose determination is their strength. You root for her in The Hunger Games, Joy and as she delivers her Oscar-winning tour-de-force in Silver Linings Playbook, opposite Bradley Cooper.

She pulls off yet another stunning transformation act in this season’s Red Sparrow, channeling her inner goddess and adopting a respectable Russian accent to play Dominika Egorova, a prima dancer with the Bolshoi Ballet, whose career is cut tragically short. Long story short: she falls victim to the most ruthless example of in-house sabotage.

Now out of work and desperate to take care of her ailing mother, she painfully agrees to accept a job offer from her uncle Vanya (a slippery eel played by Matthias Schoenaerts) to work undercover for the Russian Intelligence Agency as a red sparrow. Red sparrows are trained to seduce and manipulate and, if ordered, to ultimately destroy their targets. Dominika aces her training workshops with flying colours.

Soon she is working her first big case: shadowing an American officer named Nate Nash (Joel Edgerton) to get some crucial data out of him. Jeremy Irons is cast in the role of a general overseeing the case.

As trained, Dominika tries not to get emotionally involved, but there’s something about this Nate Nash that speaks to her heart. Will the mission be compromised? Who really is the mole in the Russian Intelligence Agency?

Director Francis Lawrence (who directed Lawrence in The Hunger Games) admirably ratchets up the intrigue and the suspense to make the overall cinematic experience compelling. But in the end, it’s not the first-rate spy thriller it could have been. There are too many scenes leading up to the film’s conclusion that are quietly frustrating and add very little to the plot.

But Red Sparrow (exploring fractious familial relations, service to country, vengeance and betrayal) is far from a letdown, thanks largely to Lawrence’s riveting on-screen presence as she expertly brings to life this formidable young woman, an exquisite blend of the tender-hearted and the tough-minded. Tyrone’s Verdict: B