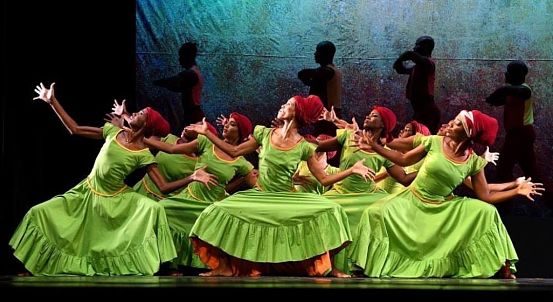 BODIES OF WORK: The company's dancers are constantly being challenged to rise to a new level, says Simms.

DURING the National Dance Theatre Company’s just-concluded 2018 season at the Little Theatre in Kingston, Marlon Simms witnessed the premiere of his newest choreographed effort, “Acts of Hope,” a captivating, multi-layered piece performed by a 12-member cast. The robust work is a fresh addition to the internationally acclaimed troupe’s vast and ever-expanding repertoire, on the occasion of their 56th anniversary. But what’s more fascinating is that the “Acts of Hope” debut coincided with Simms’ ascension to the rank of Artistic Director of the NDTC.

Simms, now 41, has been with the company for years, rising to become principal dancer, dance captain and Associate Artistic Director, prior to assuming the top job when Barry Moncrieffe retired last December. Reflecting on his maiden season as AD, Simms is relieved that support for his work and the NDTC’s mission remains as strong as ever, especially as the new generation ushers the company into a new era.

“It’s wonderful to have the support and to see a younger demographic now experiencing the works of the NDTC. We’re building a new generation, but our core audience is still with us,” Simms tells TALLAWAH, standing inside the lobby of the Little Theatre one recent Saturday night. “And as we move forward we want to ensure that everybody gets to experience what the NDTC has to offer.”

To this end, the 2018 programme brought a rich diversity to the stage: seven bold new works (by choreographers Terk Lewis, Liane Williams, Neila Ebanks, Oneil Pryce and Jean-Guy Saintus, among others), selections from the active repertoire, and a handful of remounts. Choosing works for the annual season, Simms explained, involves a detailed process.

“We have an artistic team that meets and discusses the works, the local and international choreographers we want to invite, and we basically try to select works that are timeless,” shares Simms, a senior lecturer at the Edna Manley College’s School of Dance. “The aim is always to create a dynamic programme and to showcase Jamaican and cultural experiences and to engage choreographers who will expose the dancers to different styles and challenge the dancers to rise to a new level.”

Ricardo McFarlane has been working with the company in the capacity of stage manager since 2010. “I like the idea of seeing more young people coming to the fore,” he observes. “And it’s happening in all areas of the company – the management team, the dancers and the technical team.”

With Ewan Simpson having moved on to new pursuits, veteran chorister Heston Boothe has stepped up as Acting Musical Director, arranging a droll and amusing suite of songs, “Donkey’s Tale,” for the NDTC Singers’ contribution to the new season. “It’s been interesting, but I have to admit that this new experience is drawing on all my training, everything I’ve loved about music since I first started out,” says Boothe, also well-known for his exploits with the JCF Choir and the University Singers.

But Simms and Boothe both agree that the future of the NDTC, in this post-Nettleford chapter, must be centred on the twin ideas of renewal and continuity. “The company will continue to grow,” Boothe says, “and be the excellent international dance company that it has always been.”