HEART TO YOURS: Song stylist Nickieshia Barnes pays tribute to Aretha, Bob and her roots 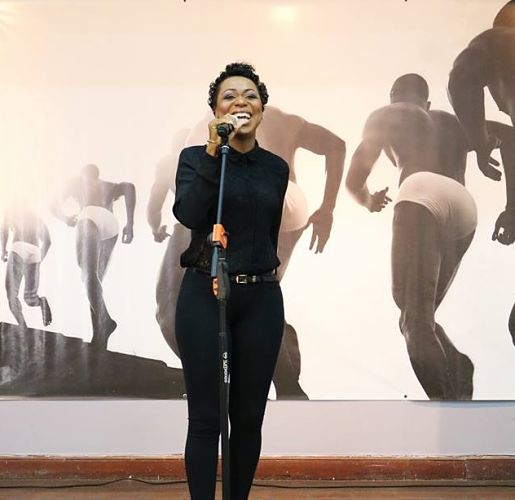 SING IT, SISTER: Barnes was this month's musical guest at the National Gallery's Last Sundays.

NICKEISHIA Barnes is an old soul and, she says, Grandma is to blame. “I grew up listening to a lot of 50s and 60s music because I grew with my grandmother who was a seamstress, and I would be putting on buttons with her while she played her music. A lot of Aretha, Sinatra,” she reflects. “So the smell of coffee brings me back to that place.”

Her performances, too. Doing a splendid mid-afternoon gig at the National Gallery on Sunday, Barnes, clad in form-fitting all-black, launched into suite of vintage hits that always take her back to being by Grandma’s side. Barnes treated her audience to a tuneful rendition of Aretha Franklin’s “Natural Woman,” Grandma’s all-time favourite song, showing off her impressive vocal range and that penchant for making every song she performs her own.

Aretha, who recently passed after a long illness, was an early inspiration. “When I first saw her, I was about six years old, and I was floored. This was a woman who looked like me and made me realize that I could dream it and it could be possible. A beautiful African queen like myself.”

Barnes, a Rising Stars alum, is a very expressive songstress and song stylist, whose gorgeous voice and big, dramatic eyes reel you in. So when giving interpretations of “You Don’t Know What It’s Like” (originally penned for Nina Simone but popularized by Michael Bolton) or Ben E. King’s “Stand By Me,” you are riveted. She has presence, so her take on Adele’s “One and Only” is truly powerful stuff, full of earnestness and yearning.

But Barnes also has great original music to her credit, with such gems as “Kisses in the Morning,” “Tra La La (In Love),” “Reach Out” and “Rock of Ages” among the highlights in her growing body of work. A daughter of Arnett Gardens, she loves her community and her reggae-culture roots. (“I’m a Junglist. I’m a fighter,” she says.) And in performing songs like Dawn Penn’s “No No No,” for example, she can’t resist making her own pull-it-up-selecta request, much to the delight of the attentive and appreciative audience.

To that end, Bob Marley holds an extra-special place in her heart. She says that even now, well into adulthood, she is constantly in awe of his songs of freedom and love. “Turn Your Lights Down Low” (complete with the Lauryn Hill rap) works the audience into a sing-along frenzy. You can tell that it’s truly her favourite Bob Marley tune.