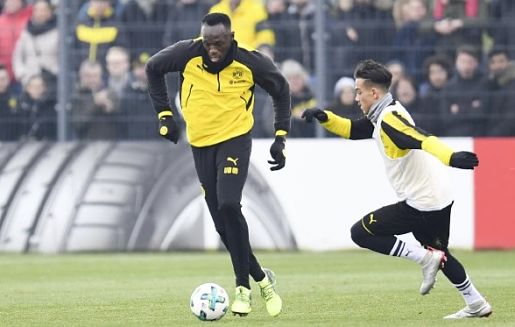 ON THE BALL: Bolt is set to continue his football journey with the Australian club.

“WE welcome Usain with open arms, and we will always remain grounded and focused on the job at hand.” So says Shaun Mielekamp, CEO of Australian football club Central Coast Mariners, who have agreed to let the sprinting legend train with the club for an indefinite period, with the aim of transforming him into a professional soccer player.

According to the club, this arrangement does not guarantee a playing contract for Bolt, but it’s a step toward fulfilling his ambition of playing football at the highest level. And it’s a win-win, as Central Coast Mariners seem set to boost their profile nationally and internationally.

“Our goal is to be the most innovative, entertaining and community-minded sports brand in Australia. This is our competitive edge,” says Mielekamp. “Having Usain Bolt come to the club to train and hopefully develop into a professional football player is perfectly aligned to this part of the club’s philosophy.”

Of course, the eight-time Olympic gold medallist is looking forward to the life-changing experience. “I am very excited about coming to Australia and would like to thank the owner and management of Central Coast Mariners for giving me this opportunity,” says Bolt, who turns 32 this month. “It has been my dream to play professional football, and I know that it will involve a lot of hard work and training to get to the level required to play and make an impact in the A-League.”

Bolt, who has already trained with such noted clubs as Germany’s Borussia Dortmund, Mamelodi Sundowns FC in South Africa and the Norwegian side Stromsgodset, is scheduled to join up with Central Coast later this month.