MAN OF THE MOMENT: How Wayne Marshall found inspiration for his latest hit 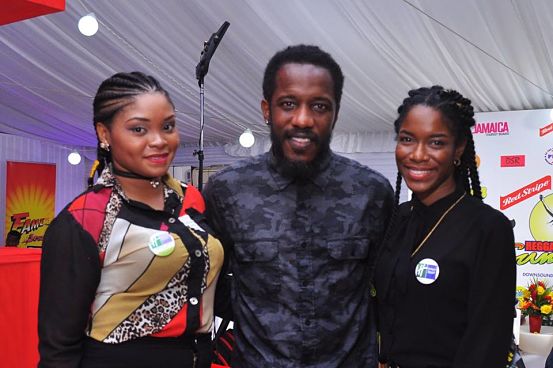 FAN CLUB: The entertainer bonded with fans at Reggae Sumfest and shared the stage with Bounty Killer.

The conviction and palpable emotion that Wayne Marshall pours into his latest chart-topping hit, “Glory to God,” immediately lets you know that the song emerged from someplace deep. As Marshall recalls, it was just another day at home, sitting down, when the song came to him.

“It was like a flood of inspiration. The melodies came with the words, and it was just a great vibe,” he tells TALLAWAH. There were some tears, and he was convinced God was reaching out to him. “And I say, ‘God, ah really me fi sing this?’ And a little after that the confirmation came.”

His friend Ryan Mark, who guests on the song, stopped by the house. They prayed about it and decided they’d use the song as an instrument of ministry to heal people.

By all appearances, “Glory to God,” a fervent prayer that also features powerhouse vocals from the entertainer’s sister-in-law Tessanne Chin, is achieving its purpose, connecting with listeners from all walks, as it excels on radio playlists and on charts at home and abroad.

At last month’s Fun in the Son gospel party, the spiritual anthem incited a mass sing-along as Marshall and Ryan joined Prodigal Son on stage. “The response is still growing,” Marshall says. “People are messaging me to send them the track, and I’d say by far it’s had the biggest impact for me chart-wise. It’s crazy to see how people are enjoying the song.”

And because every great tune deserves to be accompanied by great visual, a video shoot is slated for the coming weeks. But in the meantime, this career high is clearly in tribute to Wayne’s father, Wycliffe, who has been called home. “Losing my dad was rough, but every cloud has a silver lining,” he muses, “and to see that the song is doing phenomenally, it’s a great tribute to him.”

At the same time, the song’s prayerful sentiments couldn’t be more fitting for this moment in the wider public consciousness. “This is about a movement, so the song is timely,” says Marshall, who was among the acts performing at Monday’s #Jamaica56 Grand Gala – and who hopes to drop his next album in the last quarter of 2018. “We need an anthem like this, and the kind of impact it’s been having, I don’t take it lightly.”

“Stupid Money” – The singjay’ son Giomar supplies the hook on this fun, catchy tune that’s all about the Benjamins

Email ThisBlogThis!Share to TwitterShare to FacebookShare to Pinterest
Labels: Behind the Music, Man of the Moment, New Music, The Story Behind the Song, Wayne Marshall