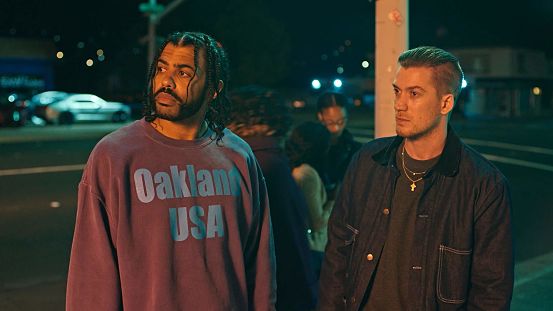 RACISM and prejudice, police brutality and harsh socio-economic realities are just a few of the provocative issues that bubble to the surface in Blindspotting, a spare but frequently jolting urban drama, written and directed by Rafael Casal and Daveed Diggs, who also turn in strong performances as the film’s pair of knucklehead leads – best friends whose bond and loyalty are sorely put to the test.

Though they have a lot in common, the boys, who earn small wages as labourers for a moving-truck company, are vastly dissimilar when it comes to their habits and principles.

A mama’s boy and convicted felon now living in a half-way house with just three days remaining on his probation, Collin (Diggs) is the yin of this dynamic duo, sporting braids and embarking on a changed-man routine (complete with green juice), chiefly to impress his ex, Val (Janina Gavankar), who works at the company’s front desk. Miles (Casal), meanwhile, is the gun-toting bad boy with the woman and kid at home – and a temper that borders on explosive.

The plot jumps all over the place but the story’s central arc surrounds Collin who, late one night, witnesses the fatal police shooting of an unarmed Black man. Day and night, he is haunted by flashbacks of what he saw.

Added to that, he has a nightly curfew and any serious violation of this and other terms of his probation will land him right back in jail. With an unpredictable partner like Miles by his side, Collin’s future is mired in uncertainty and danger.

Set in volatile West Oakland, USA, Blindspotting is a wild and entertaining little movie that exposes some sad truths. It’s no Good Will Hunting but, at its best, the film gives viewers a wised-up cautionary tale about choices, peer pressure and the consequences for a life lived wrong. Tyrone’s Verdict: B+