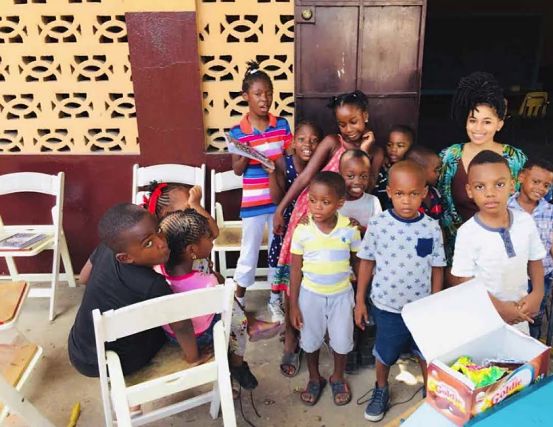 ALL MY CHILDREN: Over 40 kids participated in the summer programme, which Gray (seated, back row) hopes to stage annually.

GROWING up in Torrington Park, a tough, down-on-its-luck community in Kingston, Kimberly Gray saw how financially challenging it is for inner-city parents to send their kids to summer school or enroll them in summer programmes. That, in part, prompted her to launch EduSummer.

Recently wrapping its debut staging (July 9-28) in Admiral Town, the programme combines sports, reading corner, painting, the performing arts and other fun activities to provide the more than 40 kids with an experience steeped in life-changing edutainment.

“When I came up with the idea I didn’t know how people would respond to it, but the response has been overwhelming. I got about 45 kids to enroll, and we had an awards ceremony at the end,” says a delighted Gray, who also managed to secure some financial backing from the Member of Parliament, Mark Golding.

At 21 years old, Gray, who exudes the glam and charm of a young Carlene, has regular flashbacks to the pageants and plays she used to enter, put on in her home community to offer talented youngsters the opportunity to shine. Fast-forward about five years and, in addition to paying it forward with this summer programme, Gray is embarking on an acting career.

Appearing in her first commercial theatre production has nudged her out of her comfort zone, she readily admits. Now, she wants it all. “In the next five to ten years, I see myself doing a lot more big theatre productions. I want to travel and hopefully perform in places like Vegas and Paris,” she says.

But, for now, she’s channeling her energies into the sassy character, an underwear line that she recently started, and the summer programme. “For December, I’m thinking of doing another programme,” Gray says, “to help the kids who will be doing PEP next year.” We see motherhood in her future.