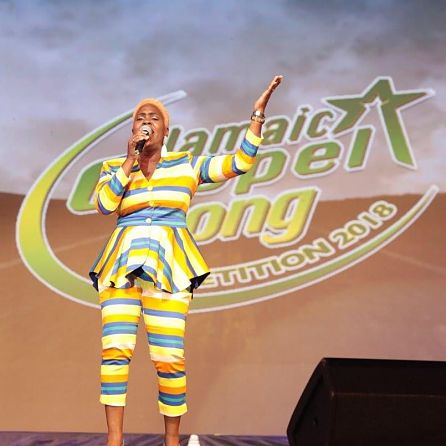 TOTAL PRAISE: Deacon-Jones belts out her winning song inside the National Arena.

THEY say the best songs spring from some deep personal truth. Daynea Deacon-Jones has channelled hers into an award-winning spiritual anthem. On Sunday night, Deacon-Jones, a born-again Christian, emerged winner of the National Gospel Song Competition inside the National Arena, in front of a supersized audience that included tonnes of supporters rooting for her.

Her winning entry, “Worshipper’s Heart,” is a confessional and deeply prayerful ode to soul-searching.

“It’s my story. My roots were in the church, but then I became wayward. I was one of those lost sheep. So the song is about me finding my way back to God and asking him to replenish my soul,” she tells TALLAWAH backstage in a post-finale interview, with her friend Opal standing by her side.

This prodigal daughter, now in her 30s and sporting a plump figure and a close-cropped blonde look, recommitted her life to the church in 2011 and she’s been in forward motion ever since, counting her blessings and singing songs of praise. “It’s been a struggle,” she admits, sounding cautiously optimistic, “but that’s life. The journey continues.”

A daughter of Portland now residing in St. Catherine, Deacon-Jones works as a full-time history teacher at Campion College. Her victory dance will be far from over, but come September she will be re-entering the stream of teaching and learning. “I guess I’m looking forward to seeing the familiar faces and getting back in the classroom with my students,” she says. “I love my job. Campion is such a great school.”

Still, Deacon-Jones vows to spend time exploring the possibility of a recording career. But, like the obedient servant, she’s the kind of woman who goes where the spirit leads. “I will go where the Lord takes me. That’s how I’m approaching the future as far as the music is concerned.”

Fans and friends like Opal (who exclaimed “Finally!” while giving Daynea a congrats hug) are sure she has many more triumphs ahead of her. “I’m elated,” says Opal. “This is something she’s always wanted, and to see it happening, I’m just so happy.”