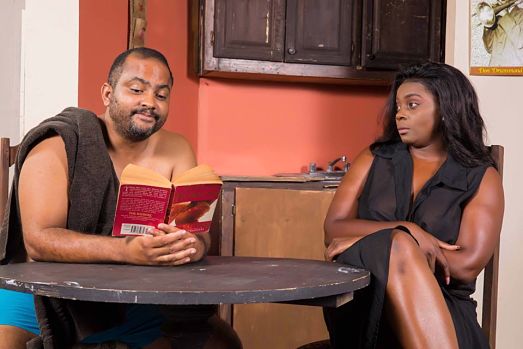 ON THE ROCKS: Tulloch and Brevett discuss their irreconcilable differences.

POOR George! His cook-shop business has hit a rough patch, his frustrated wife Anita views him as a failure and wants a divorce, and after 25 years of marriage their union has failed to produce a single offspring.

Early in the bruising new play Sugar Daddy, you would not want to be in George Leslie’s shoes. But, as convincingly played by David Tulloch (who also wrote and directed the ‘action-packed’ show), George, a man fast approaching 50, proves that with determination and a little help from above, you can always turn the tables in your favour.

But what a sweltering, exhilarating ride to get there!

Even Georgie gets in on the action. After Anita (Samantha Brevett, commanding) storms out of their upper St. Andrew home, he hires a housekeeper, Kysan (impressive newcomer Trishana Wright), an ambitious young lady desperate to leave the suffocating ghetto and escape the clutches of her unfaithful thug boyfriend Jermaine (Rolando Fagan).

Before long, despite the massive age difference, Kysan and George establish a mutual respect that blossoms into something more – a sugar-daddy romance. At the same time, as fate would have it, Anita and Jermaine cross paths and the outcome isn’t pretty.

Rounding out the strong five-member ensemble cast is another fresh face, Kimberly Gray, who plays spitfire ghetto girl Moya (Kysan’s bitter rival), who is clearly from the same school of thought as deejay Spice.

The sex aside, Sugar Daddy is a mix of comedy, relationship drama and, unfortunately, tragedy. It’s further confirmation of Tulloch’s gift for weaving a provocative plot that keeps your eyes glued to the stage, even when the dialogue occasionally loses its sheen.

The well-made set, divided into halves to showcase Kysan’s ghetto and George’s abode, hints at the play’s haves/have-nots dichotomy and its secondary exploration of class and dignity.

But all elements combined, Sugar Daddy is another solid addition to Tulloch’s body of work – a story that’s as frighteningly realistic as one could imagine. Tyrone’s Verdict: B+