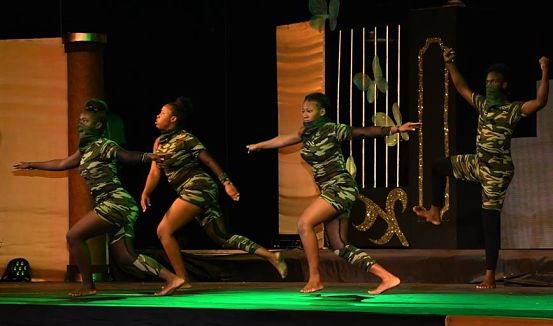 WITH THY MIGHT: Portmore Dance Theatre performing their rigorous piece "The Training."

EACH year, those of us who miss out on the National Finals of the JCDC Festival of the Performing Arts are treated to a compendium of the crème de la crème entries at Mello Go Roun,’ a tight and hugely entertaining performance package replete with memorable highlights.

This year’s showcase, emceed by Dahlia Harris inside the National Arena last Saturday night, continued that fine tradition, offering pieces in an array of disciplines.

When it came to traditional folk forms, the Portland Theatre Group commanded the stage with their lively “Bruckins Party”; Denbigh Primary’s four pairs of boys and girls gave a hyper-rhythmic “Contra-Style Quadrille”; a William Knibb contingent sizzled with their “Tambo” while the Islington Culture Group, hailing from St. Mary, raised the energy level with their “Dinki Mini” offering.

The vocalists, too, were in impressive form. Sacia Smith’s rendition of the gospel solo “Roll Back the Curtains” struck a tuneful chord, and the Sweet Sounds ensemble won us over with their melodic rendition of “Freedom Come At Last.”

As for the dance works, Portmore Dance Theatre brought military might to “The Training”; Belmont Park Primary’s pair of teeny-tiny girls elicited resounding applause for the showstopper “Volta”; Jose Marti High opted for romance and drama with “Good Ole Wife”; and Ardenne High delivered the triumphant number “The Rising.”