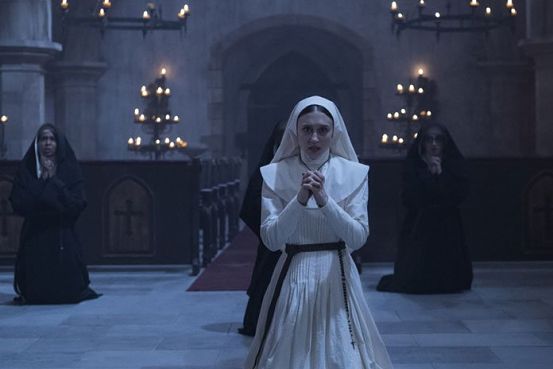 THE Abbey of St. Carta, located in the mountains of Romania, is a place where the brave dare not venture. With good reason. It’s the chilling setting at the heart of The Nun, a scary but flawed little movie that serves as a prequel of sorts to the entries in The Conjuring series. Delivering lots of jolts and suspense, it grabs hold of you from the opening sequence.

A timid nun has committed suicide, hanging herself off a balcony at the front of the abbey. Days later, a farmhand, Frenchie (Jonas Bloquet), from a nearby village discovered the body and alerted officials. How come no one from the abbey saw fit to give her a proper burial?

When the Vatican is informed of these strange happenings in Romania, they dispatch Father Burke (Demian Bichir) to investigate and file a report. Selected to accompany him is a young novitiate from London, Sister Irene (Taissa Farmiga), who is on the cusp of taking her vows to be confirmed a nun.

With Frenchie leading the way, they arrive at the abbey, only to discover that this is not your typical nunnery. It’s a dark and terrifying place, full of tunnels and secret passageways. The place looks deserted. The visitors are in for a rude awakening, when they encounter the evil force that has taken over.

What subsequently plays out is a battle between the living and a malevolent spirit that refuses to be vanquished. It’s the same evil force, apparently, that wreaked havoc in The Conjuring 2.

Directed by Corin Hardy, working with a commendable script by Gary Dauberman, The Nun seeks to explain how this entity came about. While the film does a decent job of keeping you on tenterhooks, it lacks the heft that fortified its predecessors, making them solid entries in the horror-thriller canon.

But the film is no disappointment. In short, The Nun works best as an origin story for fans of The Conjuring series who want to fit the puzzle pieces together. Tyrone’s Verdict: B

Email ThisBlogThis!Share to TwitterShare to FacebookShare to Pinterest
Labels: At The Movies, Current Cinema, Film Review, Flick of the Week, Horror