ON THE WALL: Angela Foote’s silver-medal-winning “Peeping Through” is among the show's best pieces.

WHAT makes a great photograph? An image that’s simply unforgettable. The JCDC Jamaica Visual Arts Competition & Exhibition, which just ended its 2018 run at the Jamaica Conference Centre in Kingston, delivered its most captivating images in years. In other words, the photographers stole the show. To this end, there was no shortage of highlights.

Whether capturing quaint, idyllic subjects, Mother Nature in all her resplendent glory, landscapes and still lifes, or snapshots of ordinary Jamaicans doing extraordinary things, the artists whose work made it into the showcase deserve mighty kudos and the medals and trophies they took home. 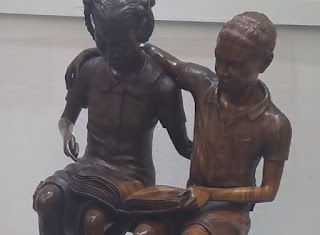 >> The Jury Has Spoken: Kingston-based photographer Renae Johnson copped the third-place jury prize for her arresting old-country-farmer shot “Diligence.” Second place went to textile artist Esther Chin (St. Mary) for her intricately woven entry “Tapestry of Ma.” But the top prize was presented to St. Catherine’s Conrad Stone, whose precious lignum-vitae carving, “Knowledge,” is of a boy and a girl seated together sharing a book.