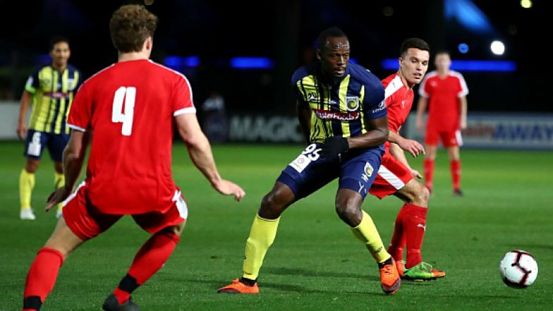 BEND IT LIKE BOLT: The sportsman making his debut for Central Coast Mariners during a friendly match on Friday.

IN his latest piece published in the Daily Gleaner, noted columnist and sports analyst Oral Tracey likens Usain Bolt’s foray into the world of professional football to a renowned nuclear physicist suddenly deciding to start performing heart surgeries. Come on now. That’s way over the top. But that’s not even the best part.

Tracey, who hosts TVJ’s controversial Sports Commentary, goes on to rip the sportsman’s ball skills. In other words, according to Tracey, Bolt ‘cyaan play ball.’ “It’s easy to appreciate that Usain Bolt is nowhere near being a good footballer, not even ‘Sunday evening scrimmage’ standards.” Ouch. That’s brutal.

But not surprising. Tracey has always had it in for Bolt. At the height of the sprinting legend’s Olympics career, the analyst made numerous disparaging remarks about Bolt that would have shaken the confidence of less sturdy athletes. But I thought they had made up. Apparently not.

Tracey will argue that with this particularly grumpy column, he is just stating the facts, calling the shots, as he sees them. But the piece, its tone especially, reeks of sarcasm and ridicule.

No one is disputing the fact: Bolt is no Cristiano Ronaldo. But Bolt can play football. He has skills. He’s above Sunday evening scrimmage. And I’m beyond certain that countless Jamaicans – not even just his fans – agree with me.

What’s more, he’s impressed teammates at the clubs he’s trained with so far, including Central Coast Mariners, the team he’s currently doing a trial stint with in Australia, under coach Mike Mulvey, who has publicly stated that Bolt’s “football fitness” is his only concern at this time.

To say the least, Tracey whipped out the torpedoes for this column. “Having scrutinized almost all of Bolt’s attempts at football since it became evident that his intent is serious, it is clear to see that Bolt’s technical flaws are countless,” he writes. “His first touch is atrocious. His movement, his ball control, his reading of the game are all but non-existent.”

Bolt has repeatedly emphasized that getting a professional football contract is the career path he’s now pursuing. To Tracey’s mind, it is a gimmick, a fantasy. “Bolt’s ambition to become a big-time professional footballer,” he says, “is really and truly a joke.” Oral Tracey is just being wicked. Hard-hearted and hurtful. And he should apologize to the big man.