THROUGH THE STORM: How Owen ‘Blakka’ Ellis laughed at himself – and found greatness 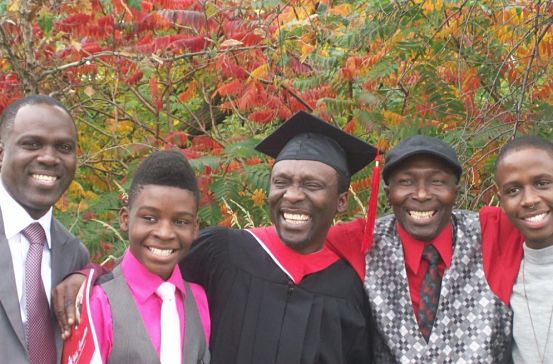 THE GRADUATE: Ellis and elated relatives celebrating a big moment.

“IF they laugh first, your life is over; if you laugh first, you own it.” This coming from Owen ‘Blakka’ Ellis, whose eventful life story, riddled with trauma and narrow escapes, sounds like the stuff prize-winning documentaries are made of. But the renowned comedian, actor, author and show producer is still here because he long ago learned to laugh through the storm and take the bitter with the sweet.”

This is the same ‘Blakka’ Ellis who, upon enrolling at the Edna Manley College’s School of Drama in 1978 was told by Trevor Rhone that he cannot become a successful actor because of his speech impediment, his lisp. But, more interestingly, Ellis’ dream of pursuing drama studies was almost shuttered because upon leaving Trench Town Comprehensive High he had only two GCE subjects. So he lacked the minimum qualifications to be accepted.

But he was a strong natural talent, who had just won Best Actor honours at the Schools’ Drama Festival. His performance was so persuasive, so convincing, that it got him through the door. He earned his diploma and ended up teaching at the college for 11 years.

Later, when Ellis wanted to do a degree at the University of the West Indies, he couldn’t matriculate with only two subjects. The late Prof. Barry Chevannes, who knew him personally, helped him get in. He eventually dropped out.

Ellis is now living in Toronto, and one day he decided he wanted to do a Masters in Environmental Studies (etc.) at York University. Don’t underestimate a determined man. He did his proposal and submitted it, firmly backing up his arguments. He was accepted for his programme of choice. He got his M.E.S in 2011, and is now pursuing a Ph.D. in Cultural Studies.

Owen ‘Blakka’ Ellis has come a long way. By his own admission, he had a rough childhood with “little love” – raised by a “vulgar” aunt, a fishmonger, who spared no lashings. “I wore glasses from third form because of a scar on my retina from too many blows to the head. But I was always laughing,” he says. “I laughed my way through life.”

He had to. That’s how he coped. And he was able to thrill his friends with his tales. An accidental entertainer. “Comedy became therapy. I was able to release my pain by making my friends laugh. They thought I was making this stuff up.” The self-proclaimed “class clown” would go on to become drama club president.

Ellis will be the first to tell you that he wasn’t textbook brilliant; academics wasn’t his forte. But a more voracious reader you couldn’t find. “Reading saved me. I became versed in language,” he reflects. He read anything he could get his hands on – even the sardine tin. He always believed there was greatness ahead of him.

Today, well into his 50s, Ellis emphatically states, “My life is a testament to walking by faith and not by sight… Life is a wonderful thing; take what you get and make the best of it.” And don’t try to tease him about his small stature. “I’m only short,” he says, laughing. “I’m short of nothing.”