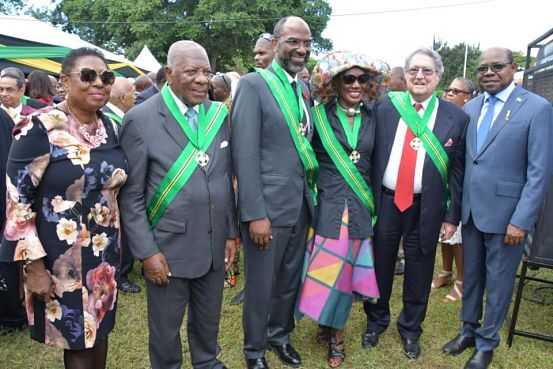 DUE to ill health, Harry Belafonte wasn’t on hand to be presented with the Order of Merit (OM) by Governor-General Sir Patrick Allen, but fellow entertainment legend Grace Jones was in attendance and was conferred with the Order of Jamaica (OJ) for “exceptional contribution to her field internationally.” Stepping out in a stylish black top, asymmetrical pattern skirt, hat and shades, Jones was in for resounding applause as she made her way up to the podium.

The arts and entertainment community was very well represented among the large batch of honorees, as the 2018 National Honours & Awards ceremony took over the lawns of King’s House on Monday morning.

For outstanding contribution to popular music and broadcasting, Winston Barnes was recognized with the Order of Distinction (OD) in the rank of Commander. Among the Officer Class honorees were the likes of Barbara Blake-Hannah (for her work in culture, public service and cultural heritage preservation), Joan Andrea Hutchinson (for contribution to the cultural arts), Johnny Gourzong (tourism and entertainment), Bob Clarke (broadcasting and entertainment), Sheila Rickards (dance and music), Mazie Miller (culinary arts), Dermot Hussey (promotion of Jamaican music) and Winston ‘Yellowman’ Foster for his decades in the music industry.