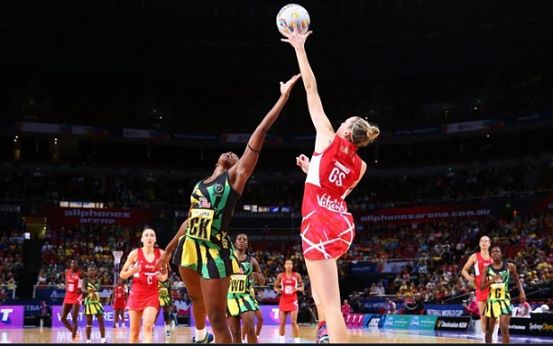 ON THE BALL: The Jamaicans and the English continue their intense rivalry.

DESPITE a few less-than-stellar moments, Jamaica’s Sunshine Girls maintained their impressive run in the 2018 Lasco Sunshine Series on Thursday night, defeating the England Roses 55-43 to take a 1-0 lead in their three-test series, which resumes at the National Indoor Sports Centre in Kingston on Saturday.

The Jamaicans stamped their superiority from the get-go, taking early leads of 2-0 and 4-0 before the English girls managed to close the gap and equalize at 5-5. The visitors became even more aggressive in their plays, but the Jamaicans were in a no-nonsense mood and quickly pulled away with consecutive goals to take the score to 11-7, 12-8 and 16-11 at the end of the first quarter.

Jamaica’s careful ball possession and shooter Jhaniele Fowler-Reid’s goal-circle dominance continued in the second stanza, with Jamaica leading 18-11 and 22-15. By the time the tally reached 25-16, Fowler-Reid was on fire, with great support from goal-attack Shanice Beckford. Strong defensive work from Shamera Sterling and Stacian Facey also helped, as Jamaica raced to a ten-point lead at 28-18, and then 31-18 with three minutes to go in the half. The lob passes to Fowler-Reid, coupled with her accurate shooting afforded the Sunshine Girls a 35-21 advantage at the half-time whistle.

Shantal Slater came on for Fowler-Reid at goal-shooter, but England got more of the same treatment in a rather uneventful third quarter, which saw scorelines of 37-26 and 40-28 in favour of the home side. The English shooters gave Sterling and Facey some challenging work as the visitors desperately tried to reduce the deficit. Jamaica stayed in control, ending that quarter 46-32.

Fowler-Reid replaced Slater and Thristina Harwood (Beckford’s replacement) got her first taste of the action at the top of the last quarter. The England girls, unsurprisingly, looked hungry for a breakthrough and forced the Jamaicans into numerous turnovers. Several squandered opportunities by the local girls allowed the visitors to rally with several unanswered shots, bringing the score to 50-40.

Determined to maintain a wide margin, the Sunshine Girls refocused on the task at hand, maintaining their ten-point lead at 52-42 and 53-43. Kadie-Ann Dehaney came on for Sterling in the last minute of the match, as the Jamaicans re-established their dominance. At the sound of the final buzzer, Fowler-Reid sank a long-range shot to end the match at 55-43.

> WOMAN OF THE MATCH: Jhaniele Fowler-Reid
A towering and dominant presence in the goal circle, the team captain led the home girls to victory with a masterful performance that further solidifies her status as one of the world’s top goal-shooters.