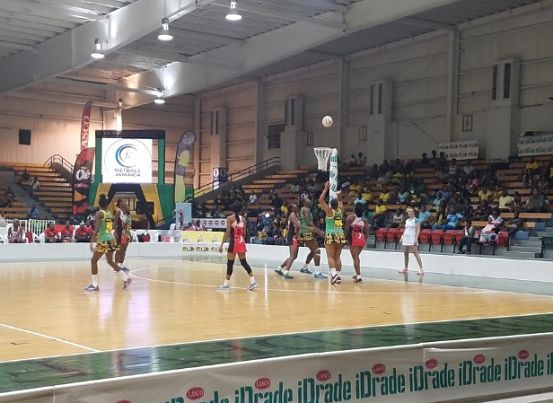 PLAY MAKERS: The J'cans and the Trinis treated spectators to an exciting Game Two.

COMING off a 61-40 triumph in their opening match on Sunday, Jamaica’s senior netball squad, the Sunshine Girls, put on another largely impressive display to defeat their Trinidadian counterparts 51-40, as action continued in the Lasco Sunshine Series inside the National Indoor Sports Centre in Kingston on Tuesday evening.

Playing before a lively home crowd, the Marvette Anderson/Winston Nevers-coached girls demonstrated that they are making commendable progress as they inch closer to the fast-approaching Fast5 World Series in Melbourne, Australia and next year’s eagerly anticipated World Championships in Liverpool, England.

With sharp-shooter Jhaniele Fowler-Reid getting a rest day, rising stars Thristina Harwood and Shanice Beckford led the attack for the home side, which started off shakily, as we trailed the Soca Girls before roaring back in the dying seconds of the first quarter to tie the score at 12-12 before eking out a 13-12 lead at the sound of the buzzer.

With goalkeeper Shamera Sterling forcing Trini turnovers in defence and Beckford a workhorse for the attack (very accurate and consistent attempts at goal), the teams continued to trade goals in the second quarter. The score equaled at 16-16; T&T moved ahead 20-18; Jamaica reclaimed the lead 24-23 and, with two minutes remaining in the half, the scores locked again at 26-26 and 28-28 at the buzzer.

An even more keenly contested match-up kicked off the second half, but Jamaica (with a new Beckford/Shantal Slater combination in the goal circle) managed to sneak away with leads of 33-31 and 36-32. We were up by five at one point (37-32), thanks to some brilliant manouevres by the centre-court players and interceptions in defence. The third quarter ended with Jamaica leading 42-33.

T&T fought valiantly to re-emerge in the final quarter, but the Jamaicans, despite numerous unforced errors and mid-court turnovers, held on to the lead, moving ahead 44-33 and 46-34. A smart decision was to take vice-captain Vangelee Williams off the bench and reintroduce her at goal-defence. With only five minutes left in the match, the Sunshine Girls kept their composure and held a 49-37 advantage.

And with just three minutes to go, Harwood was summoned to replace Beckford in the attack. A 51-38 scoreline eventually became 51-40 at the final whistle.

>> WOMAN OF THE MATCH: Shanice Beckford
A smart, wily attacker who plays to her strengths. Very agile and very accurate with her attempts at goal, her on-court moves reap dividends for the team in the heat of battle.

The Lasco Sunshine Series resumes at the NISC with Jamaica facing England in three tests (Oct. 11, 13 and 15).