‘AH WAH DO DEM?’: Old-school vibes and new-school flavour make a thrilling mix in From Den Till Now 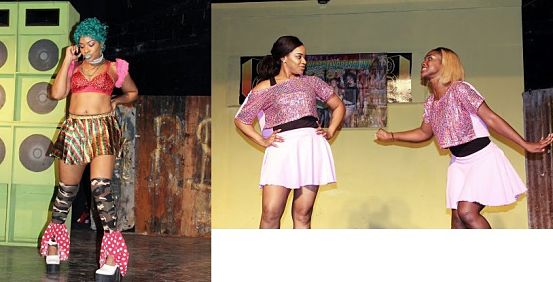 WHAT do bruckins and Elephant Man’s “Summer Bounce” have in common? How about Kumina and QQ’s “Stookie”? There are surprising parallels between these two dance forms, which seem vastly dissimilar on the surface. But thanks to the research and investigative work of Orville Hall and his Dance Xpressionz team, you can only agree that “old time sinting come back again,” while watching their show From Den Till Now.

The old school and the new school make a scintillating blend in the clever and rhythmic dancehall musical, which charts the evolution of Jamaica’s dance and music, highlighting the ska, mento and rocksteady era, such Africa-derived folk forms as tambo and revival, and climaxing with modern-day reggae and dancehall.

It’s a fine piece of edu-tainment theatre, laced with humour, wit and the kind of nostalgia that thrills. The audience loved every minute of the production, written and directed by Hall and co-starring several graduates from the EXED dance programme and Dance Xpressionz. 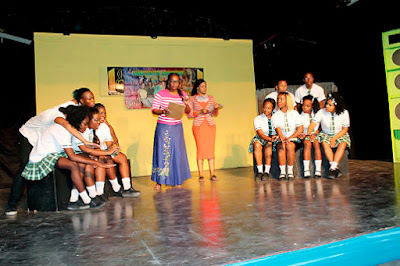 The narrative centres on the fictitious, Downtown-based Xpressionz School of the Performing Arts, which is on the cusp of closing its doors due to lack of funds. They must raise $750,000 fast. When Principal Pulpit (Hall) informs the students of a Theatre Arts Challenge Quiz awarding $500,000 to the wining school, the enthusiastic students embark on a mission to prepare and to save their school from closure. They dive deep, researching the history of our dance and music, while planning a fundraising concert to demonstrate what they’ve learned and to raise more funds.

With electric choreography, an eclectic soundtrack, era-appropriate costumes and the exuberance of the young cast, the show sizzles, as we journey with them through the years. Who wouldn’t enjoy reliving the plaid shirt/mesh merino/ rolled-up-pants-foot style of 80s dancehall, or Bogle’s (aka Mr. Wacky) ascension to the status of dancing king, long before Ding Dong was commanding partygoers with the “Shoulder Fling”?

From Den Till Now takes the formulaic root as far as the plot goes, but they earn high marks for bold originality when it comes to execution, cleverly using relatable scenarios (area leaders and politicians; gangs and feuding girls) and everyday settings (church, tenement yard) to illustrate the earlier dance forms, creatively weaving them into the fabric of the story. Tyrone’s Verdict: B+