LET’S PLAY: A Star is Born remake has its flaws but ultimately shines 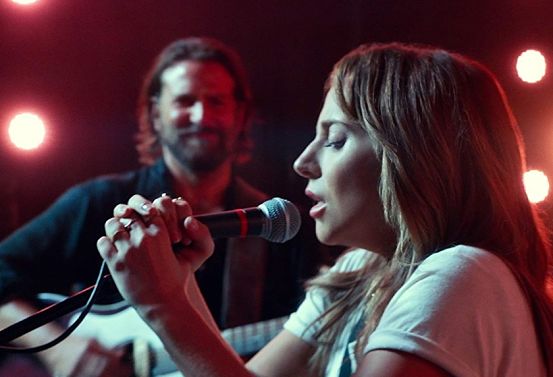 'ALLY' THAT GLITTERS: Lady Gaga mesmerizes costar Bradley Cooper in this scene from the 2018 remake.

SOMEWHERE in the uneven but ultimately satisfying new movie A Star is Born, someone says something about a caterpillar becoming a butterfly. There’s no better way to describe the metamorphosis of the film’s central character, a wide-eyed dreamer named Ally (convincingly played by Lady Gaga), who goes from restaurant server and gay-club performer to Grammy winner for Best New Artist. From wannabe to the real thing.

Bradley Cooper, who plays Jackson Maine, the rock star who discovers her singing in French in a club full of drag queens, also directs the film, a modern-day update of the classic, whose previous incarnations featured Janet Gaynor in the 1937 original, Judy Garland in the first remake in 1954 and Barbra Streisand in the second remake in 1976.

Before long, Jackson and Ally strike up a relationship. They become head-over-heels lovers. A good girl who still lives at home with dad, she eventually quits her restaurant job and gets immersed in his rock-star world (sold-out concerts, screaming fans), accompanying him on tour. Determined to cure her shyness, he brings her out on stage one night and they perform a killer rendition of “Shallow,” the kind of showstopping number you want to hear over and over again.

But Jackson has his demons – drugs and alcohol and self-destructive tendencies – that soon drive a wedge between them. Things take an explosive turn as Ally’s rise to solo stardom begins. With lavish photoshoots, an SNL appearance and a debut album in the works for Interscope, she morphs into a packaged pop star whose shining time has finally come. Jackson, meanwhile, comes off as the jealous, insecure boyfriend who can’t bear to see his girlfriend outshining him. It all gets very messy.

A Star is Born (exploring artistry, approval and the meaning of success) is an entertaining and emotionally rich film that seems to lack a spark in the early moments. You keep waiting for it to reel you in. And when it finally does, with echoes of Crazy Heart and Country Strong, you are indeed won over. Tyrone’s Verdict: B