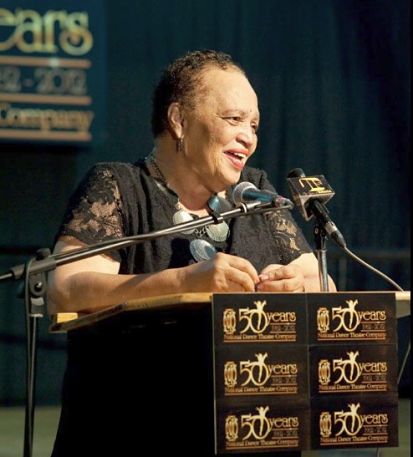 ON MESSAGE: Gloudon paid tribute to the legends and shared some keen observations.

WATCHING the players in a theatrical production carry out their roles with panache and effortless conviction, the uninitiated are easily convinced that showbiz is light, easy work. But Dr. The Hon Barbara Gloudon will be the first to say it’s anything but. The esteemed playwright-producer and living legend of Jamaican journalism gave a lecture at the Institute of Jamaica (IOJ) on Thursday morning, addressing “Theatre in Jamaica’s Heritage.”

“It is hard work, even a lot of people who say they do theatre do not understand that it is hard work. Everything must be done properly and done the right way,” stressed Gloudon, whose work also includes the often humorous and witty pantomimes, which open at the Little Theatre on Boxing Day each year.

Gloudon, who spoke without recourse to a written speech, made no bones about calling out the lack of discipline and professionalism she sees lurking in certain parts of the industry. “You go to some plays and they can’t start on time. Why? It sends the wrong message. Punctuality is important; the discipline is important. Actors who are coming into this business must realize that time is money; you have to get there on time,” she told the packed lecture theatre, comprised mainly of high-school theatre arts students hailing from such institutions as DeCarteret College and Immaculate Conception.

Mrs. Gloudon says she’s also peeved about the snail-pace rehabilitation of the Ward Theatre. “Why can’t we get it fixed back? It has some things that other theatre houses don’t have,” she pointed out.

While taking a trip down memory lane, she paid homage to the likes of Louise Bennett, Ranny Williams, Lois Kelly Miller and Prof. Rex Nettleford. One of her all-time favourite theatre people is Oliver Samuels, whose early career she was instrumental in getting off the ground. “Oliver was one of the finest actors I ever met. He knew what he was doing,” she said.

And today, it’s actors like Samuels, she says, who make the best of Jamaican theatre such a delight. “Theatre is a wonderful gift,” she emphasized. “We can create; we can make mistakes and correct them for the next performance.”

Aspiring theatre practitioners, she cautioned, would do well to take a leaf out of the books of the iconic forerunners. “Learn your role and excel in it. Take good care of your instrument. Learn the words and always be ready to present,” she advised. “Over time you learn that theatre gives you the creative freedom to take real life and turn into something more important.”