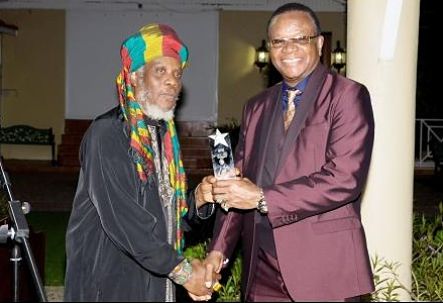 Under The Stars: The al-fresco ambience, glamorous evening wear and easy-breezy vibe combined to lend the black-tie affair lots of charm and élan, later spiked with roots-rockin’-reggae flavour as the in-house deejay really got into his groove.

Let’s recall a great man: While guests sipped wine and champagne and munched on hors d’oeuvres, various speakers paid glowing tribute to Tosh during their time at the podium. Copeland Forbes, “the walking reggae historian,” recalled travelling to Africa with the reggae legend. “It was a great experience being around him. He was an educator and an inspiration,” Forbes said. “It was a great pleasure working with him over all those years.” Mutabaruka, meanwhile, hailed Tosh as a pioneer in the marijuana movement. “We appreciate that Peter Tosh did ah tell them ’bout ganja from long time, [and] most of what he was saying has come to pass.”

… And the award goes to: During the presentation segment (three awards were handed out), emceed by Tosh’ lovely daughter Niambi, the Steppin’ Razor Award went to conscious reggae crooner Bushman, who described Tosh as a musical influence in his youth. Mutabaruka was presented with the Bush Doctor Award, and Delroy Morgan, patriarch of the Morgan Heritage clan, received the Legalize It Award. Dave Rodney, a longtime family associate, collected the award on his behalf.