WHO DO YOU THINK YOU ARE?: Rawlins and Menou are the perfect match in ‘Owl & Pussycat’ 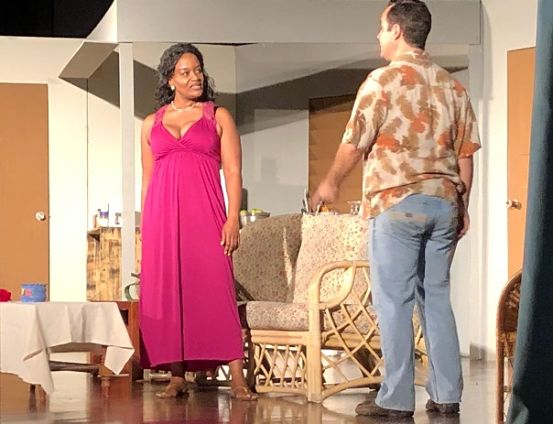 STRIKE A POSE: Rawlins and Menou give sizzling performances as the "actress" and the "writer."

“THIS is a nightmare. I’m screaming but I can’t make a sound,” wails Felix Sherman, midway a terrific staging of The Owl and the Pussycat at the Courtleigh last weekend.

Felix (Jean-Paul Menou, superb) has become, more or less, a hostage in his upper St. Andrew apartment, thanks to the “arrival” of Doris Wheeler (Nadean Rawlins, excellent), who has made herself at home. Why? Because she was a prostitute with a thriving business and Felix, who has been spying on her from next door, had the audacity to call the cops on her. Subsequently, her landlord had her evicted.

With nowhere to go, she’s come to Felix, with her bags and pans and radio, because her homelessness is all his fault, and he’s obligated to provide her with lodgings until she gets back on her feet. Right? Doris Wheeler, we feel your pain.

Laced with moments of searing dramatic tension, screaming matches and hefty doses of humour, the play tackles everything from identity and sexuality to classism and literacy to pride and prejudice and personal growth.

It’s a very well-made play, directed by Pablo Hoilett, who has a penchant for orchestrating dramedies (often Jamaicanizing classic works) with solid results. He continues that track record with this two-hander (originally penned by Bill Manhoff) fuelled by Rawlins and Menou’s dynamic chemistry.

They give performances that are nothing short of first-rate. Hoilett makes some smart directorial choices as far as the overall staging goes, but for the most part it’s Menou and Rawlins sparring under the lights and disappearing into these meaty parts like the pros they are.

While Menou captures the neuroses of a writer and quasi-intellectual (who rides a bicycle to the bookshop where he works), who can’t decide if he despises Doris or secretly has the hots for her, Rawlins zones in on Doris’ idiosyncrasies, from her fear of big words to her temper to her tendency to fall, by her own admission, for men who are on the downlow.

The clever, witty dialogue, the sensible set (the interior of Felix’s apartment) and the eclectic soundtrack add layers of sexy-spiky charm to the whole thing. Tyrone’s Verdict: A-