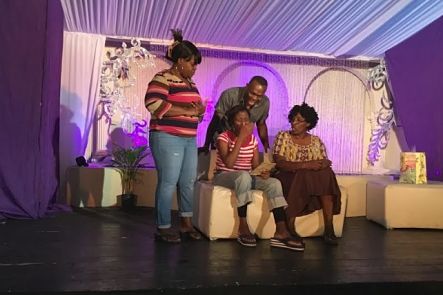 KEEPING THE FAITH: "It's empowering," says Thompson. "People are getting a message from what we do."

ACCORDING to Pastor Cornelius Brown, the Freedom Ministry team is a multi-denominational family comprised of Christians who do not hesitate to give of their time and talent to make the mission a success. No one is more committed to this mission than Paula Thompson, who’s been with the ten-year-old group since 2010, rising to play principal roles in the ministry. “Finding people who will give of their time has been a blessing,” says Pastor Brown, “and Paula is one of those family members who has really been instrumental in our success, putting everything aside.”

Thompson is actress, organizer and chief script-writer, tasked with ensuring that the plays they put on for the annual DramaFest (now in its third year) are solid crowd-pleasers. “We come together and flesh out ideas, and then I am given the task of writing the dialogue. It’s not easy, and that’s why I think the inspiration is God-given,” she explains, speaking with TALLAWAH one recent morning at the Phoenix Theatre, where DramaFest 2018 takes centrestage this weekend with five plays – faith-based dramas sure to delight and provoke thought.

Despite such successes to her credit as the hit My Wife’s Mother-in-Law (a play that deserves a wider commercial-theatre audience), Thompson comes off as a bit guarded about her craft. “For now my writing is just for Freedom Ministry. I don’t see myself going into commercial theatre at all. I think you should function in the area that you have been assigned. That’s when you set yourself up for conflict,” says a laughing Thompson, who holds undergrad and postgrad degrees in Management from UWI and UTech.

But humility aside, she is proud of the work Freedom Ministry has been doing over the years. “As a believer, you get to spread the gospel with this work, so why not go for it? Not everybody can be a preacher or an evangelist, so this is one way of playing your part,” she reasons. “All of the actors are volunteers who believe in the vision of Freedom Ministry.”

Ultimately, the team wants to transform the plays done at DramaFest into film to widen their reach. But, for now, it’s all about empowering their live-theatre audiences. “Our mission is to spread the gospel, empower and uplift persons. We want it to continue. We want it to remain, and with God at the helm it will,” says Thompson, adding that theatregoers are in for a real treat this weekend. “You’ll laugh. You’ll cry. Every emotion you can think of you’ll experience with these plays. They are about issues and struggles that people have to go through. They are somebody’s story, so we tried to make the stories full and rich.”