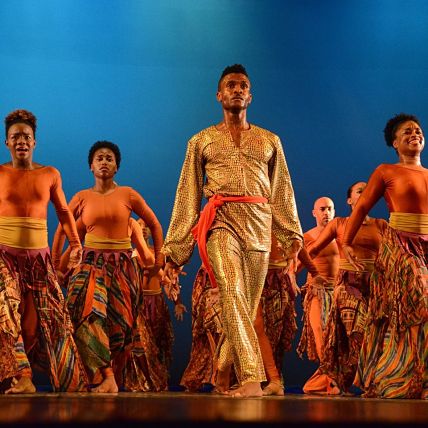 GOLD STANDARD: Hart leads the company in a performance of "The Potter."

FRESH from a successful remount of the hit dancehall musical From Den Till Now, Orville Hall brought his prowess as a choreographer to the just-concluded season of the Stella Maris Dance Ensemble, premiering a new piece titled “Scandal Bag.” A tribute to freedom-bound reggae icon Buju Banton, it vigorously explores the plight of the ‘deportee’ who, upon returning to yaad, is made an outcast. But, as with any story of perseverance against the odds, there’s light at the end of the tunnel for this unfortunate soul, played with great assuredness by Andrano Graham, backed by the ensemble and members of Dance Xpressionz.

With its easily recognizable ghetto-living/zinc-fence backdrop, the high-energy piece comes on strong and is anchored by Hall’s signature fast-paced choreography set to a soundtrack of Banton tunes and other selections.

“Scandal Bag” was one of seven pieces that made up the programme celebrating the dance company’s 25th anniversary. Renee McDonald’s “The Vow” was the other new work. It’s an intimate, deeply moving ménage-a-trois (Meisha Harris, Gavin Hart and Ashleigh Wilson in fine form) that evolves through butterflies-in-the-stomach love, the arrival of the other woman, betrayal and heartache. The evocative mood lighting and spare choreography, coupled with singer Skylar Grey’s haunting vocals on “Stand by Me” made the piece a sad but simplistically gorgeous success.

By contrast, the show opened with Kariamu Asante’s “Sankofa-Ja” (a burst of rhythm and energy and spirited drumming), exploring Afro-Caribbean identity and the idea of belonging. “The Potter” (choreographed by Artistic Director MoniKa Lawrence and Patsy Ricketts), a bonafide Stella Maris original, came off yet again as a glorious, full-bodied tribute to Rex Nettleford. Elegant and draped in gold, Gavin Hart gave a masterful turn as the late, great dance teacher and cultural philosopher.

The show closed with Lawrence’s 2002 crowd-pleaser “Liza,” a humorous, dramatic work centred on a country girl (Monique Spence) who meets the man of her dreams (Hart) and their bumpy ride to the altar.

In the end, Stella Maris’ 25th season of dance won us over, delivering a satisfying mix of fresh works and remounts and the kind of exuberance and admirable artistry we’ve come to associate with their take on dance theatre.