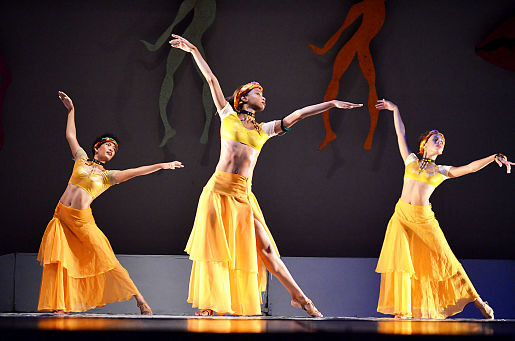 GRIT & GRACE: Eight works made up the company's superb 2018 show.

EXPECTATIONS were high for the Company Dance Theatre’s 30th anniversary season. How could they top their usual full-bodied display of artistic excellence? What greeted patrons and the company’s long-time supporters at the Little Theatre recently was their best season yet.

Dubbed “Umcimbi,” the recital unleashed a celebration (what else?) of motion and magic and the kind of diverse (athletic, sublime) choreography that challenged the talented young dancers to rise to a new level of expression.

Four new works (there were eight pieces in total) made up the programme. Shelly-Ann Maxwell’s “As Yet Untitled,” featuring red-clad dancers offering lithe, unformed movements to a Philip Glass score, was met with resounding applause at the end. It was short of nothing. Maxwell’s innovative approach to crafting movement and storytelling, coupled with Nadia Roxburgh’s clever lighting tricks, yielded splendid results – not to mention some great solo work from male leads Steven Cornwall and Andrew Bailey.

“In/Separable,” choreographed by Arsenio Andrade, explored defiance and dominance, power and control, with a guys-versus-the-girls motif. Clever. Unforgettable. Full of athletic prowess and accompanied by a menacing score, it hit hard with a vengeance.

Meantime, Sade Bully’s moody “Dimensions,” a dance in four acts, was dedicated to the memory of Dexter ‘3D’ Pottinger, while Artistic Director Tony Wilson’s lugubrious “Blood at the Root” was a solo piece performed by Lindsey Lodenquai, moving to the haunting, pain-soaked strains of Nina Simone’s “Strange Fruit.”

Wilson’s “Journey” opened the show earlier. The boys in pastel trunks/girls in matching two-piece responded with vigour and relish (lots of outstretched hands, aerial leaps) to the primal, booming music of Hans Zimmer.

Renee McDonald, one of CDT’s most accomplished alumnae, remounted her 2016 solo piece “One80,” starring agile, androgynous beauty Courtney Payne. Stepping into that tiny circle of light – writhing, contorting, fighting back – Payne was a compelling centerpiece as a sonorous Kanye West beat drove her actions. A beautiful contrast of the tough and the tender.

The show closed with “Calabash!,” Wilson’s signature piece of choreography, full of festive, razzle-dazzle energy and regal flair. Powered by selections from The Lion King soundtrack and committed dancers commanding the spotlight in purple and blue costumes, the dance beautifully epitomized this year’s celebration theme.