BEST OF 2018: Orville Hall talks about his groundbreaking success with the first dancehall musical 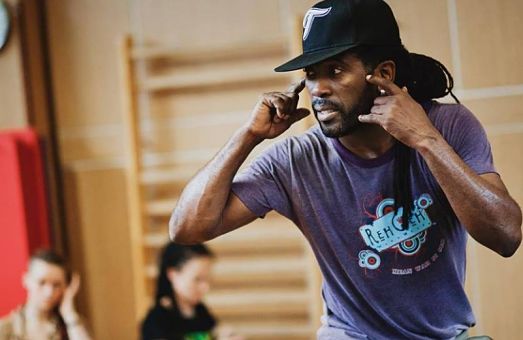 PUTTING IN WORK: “We need to educate the youngsters and take steps to institutionalize our dance culture, not just hustle it,” says Hall.

THE name Orville Hall has become synonymous with the kind of electric dance choreography that draws standing ovations, the hit televised talent series Dancin’ Dynamites, and the group Dance Xpressionz, which continues to advance from strength to strength. Hall, who turns 51 this month, had a big year. The major highlight was the remount of From Den Till Now, a definitive dancehall musical (which he wrote and directed) that’s as delightful as it is deeply educational. Hall certainly has a hit on his hands.

TALLAWAH: You remounted From Den Till Now to great reviews, as Jamaica’s first dancehall musical. What does this kind of pioneering success mean to you?
Orville Hall: It’s overwhelming because people received this remount the same way they did the first show, when it opened last year. [From Den Till Now] actually started out as a 20-minute piece that we did about 10 years ago in Massachusetts, and when we came back to Jamaica, we were invited up to Moneague College to give a presentation, and for that we turned it into a 45-minute production, and we toured the hotels with it. And last year when I was in Tanzania, the idea for a full-length musical came to me. This is the story of EXED College, because it’s the same kind of struggles we faced, and the need for fundraisers to keep the school going.

TALLAWAH: We really enjoyed your piece “Scandal Bag” for the Stella Maris Dance Ensemble’s 25th anniversary season. You take such a high-energy approach to choreography and storytelling.
Orville Hall: That’s my style. What I find is that a lot of the local dance companies don’t incorporate hardcore reggae into their programme; they are more modern-trained. So one of the things I want to do is to show how we can use reggae and dancehall to make the productions more Jamaican. I like to train the bodies and introduce them to a different discipline.

TALLAWAH: Is there a follow-up to From Den Till Now in the works?
Orville Hall: For next year what I want to do is bring back a play I did about three, four years ago called Corner Shop. It’s about a lady who runs a shop, and she’s a Garveyite who wants to educate the youths about Garvey and his teachings. Everybody who comes to the shop she tries to teach them these things.

TALLAWAH: Is Jamaican dance culture currently positioned where it should be?
Orville Hall: We see some good things happening, and we like that. When you look at artistes like Ding Dong and what they’re achieving on the world stage, it is a good look. And we need to capitalize on it. But there are sections of the culture that need to be told. Also, you now have a lot of inner-city dancers touring, bringing the culture to other parts of the world, but they need to be more knowledgeable of the history, not just the new school. We need to educate the youngsters and take steps to institutionalize our dance culture, not just hustle it. That way we can properly earn from it.

TALLAWAH: And, of course, you’ll continue to play a pivotal role with Dance Xpressionz. What do you want your legacy to be?
Orville Hall: This is my legacy. A show like From Den Till Now will still be entertaining and relevant 20 years from now. All we’d have to do is add some of the contemporary music to make it current. This is what I’m passionate about. I was telling some people recently that if I’d gotten rich I probably wouldn’t have done a show like From Den Till Now, and be involved with these kinds of projects. But I’m a culture-keeper, and these projects keep me rooted in Jamaican culture.