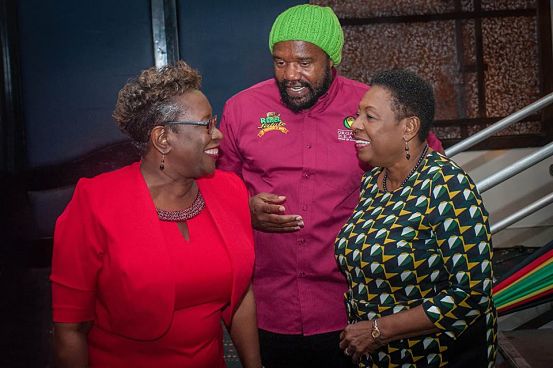 UNSURPRISINGLY, Buju Banton’s recent return to Jamaica, after completing his prison sentence – and the outpouring of love and continued support from countless Jamaicans – has met with mixed reactions in some quarters.

In his latest Gleaner column, for instance, sociologist Dr. Orville Taylor observes, “Unless we believe that he honestly did not do the crime and was framed, he deserves no hero’s welcome because we must have zero tolerance for lawlessness, as we must to corruption and nepotism – all of which fuel crime.”

Culture minister Olivia ‘Babsy’ Grange has heard the talk, and she used the occasion of Thursday’s launch of Rebel Salute to make her personal stance abundantly clear. “Buju has served his time and is now a free man. And we are 100 percent in support of him,” she said to a round of applause from the large Jamaica Pegasus audience. “As you may have noticed, he did not come back on a flight as a deportee; he came back to Jamaica as a free man.”

Grange also broke her silence in response to the whispers that she was noticeably absent from the throng of locals who flocked to the Norman Manley Airport on December 7 to welcome The Gargamel home. Chris ‘Johnny’ Daley, who hosted the Rebel Salute launch, joked that there’s a rumour going around that PM Andrew Holness forbade ‘Babsy’ Grange from going to the airport. Grange says nothing could be further from the truth. “If I wanted to go to the airport, I would have been there. My Prime Minister would not have stopped me,” she stated firmly. “But sometimes it’s best to do what you have to do without making a production out of it or without exploiting the situation.”

In conclusion, Minister Grange emphasized, “All I have to say tonight is, ‘Welcome home, Buju. We love you.’”

Rebel Salute 2019 will once again be held at its new home, the Grizzly’s Plantation in St. Ann, on Friday, January 18 and Saturday the 19th.