SET IT OFF: Widows reels you in with a crackling tale of risk and retribution 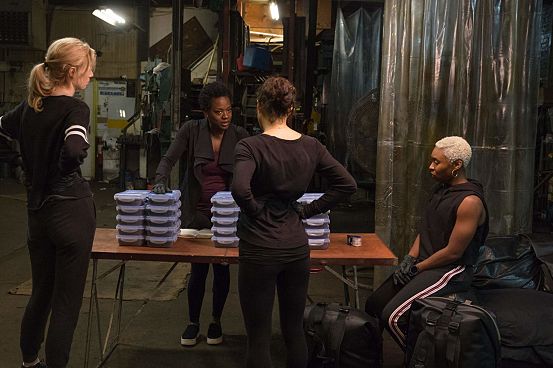 EXIT STRATEGY: Davis and the ladies finalize their plan.

SET in Chicago, Widows is a twisty, engrossing drama-thriller about ruthless betrayal, resilience and survival that presents leading-lady Viola Davis with the grittiest role of her Oscar-winning career.

Davis stars as Veronica Rollings, a devoted wife mourning the death of her Caucasian husband, Harry (Liam Neeson), and desperately trying to pick up the pieces. Veronica (who had lost her only son, Marcus, to police brutality) is devastated by her husband’s tragic end, but as viewers soon learn, Harry was no saint. He was a criminal with a taste for big money who made a lot of enemies. And now that he’s dead, they’ve turned on Veronica to collect.

She is scared to death of Jamal Manning (Brian Tyree Henry), an aspiring politician in Chicago’s 18th Ward who claims Harry stole a couple millions from him. Jamal’s younger brother (played by Daniel Kaluuya) is twice as frightening.

When Veronica discovers the blueprint for Harry’s next big score, she seeks out the bereaved wives (Michelle Rodriquez and Elizabeth Debicki) of Harry’s cronies who are also near penniless, and together they hatch a plan to steal five million dollars to pay off the debts and give their lives a fresh start.

Directed by Steve McQueen (12 Years a Slave), who co-wrote the screenplay with Gone Girl’s Gillian Flynn, Widows is a superlative feature that moves at a steady pace, ratcheting up the intrigue and suspense as the plot thickens.

The film is heavy with star power, featuring tidy supporting work from Colin Farrell, Jacki Weaver, Cynthia Erivo and Robert Duvall, among others.

Davis is in her element. Veronica has to make tough choices, some she’s not proud of, but desperate times call for desperate measures. And that’s really what this film is all about: how one copes with the fiery darts life throws at you when you least expect them.

Still, there are no innocents and certainly no winners in Widows. Because what McQueen’s jolting film underscores, above all else, is the universal truth that you reap what you sow. Tyrone’s Verdict: A-

Email ThisBlogThis!Share to TwitterShare to FacebookShare to Pinterest
Labels: At The Movies, Current Cinema, Flick of the Week, Movie Reviews, Viola Davis