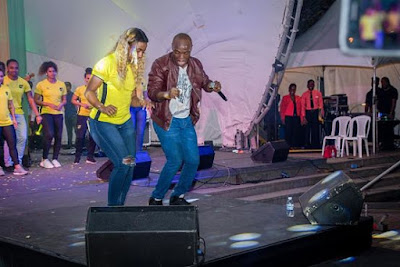 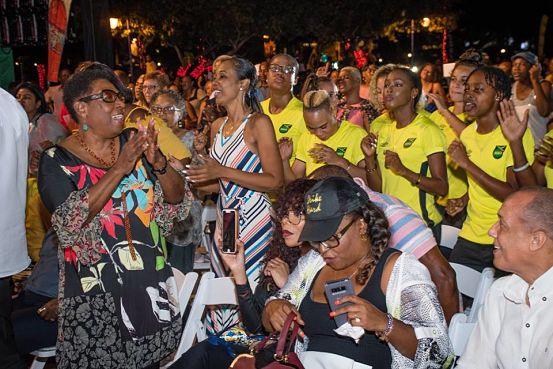 DANCE WITH ME: (Top) Downswell and one of the players putting in work on stage; Grange and the Girlz enjoying the music.

AFTER such a triumphant year, the Reggae Girlz have much to be grateful for. The World Cup-bound senior footballers, along with their coaches and managers and JFF support staff got a glorious opportunity for thanksgiving, when they gathered inside New Kingston’s Emancipation Park on Sunday evening for a free-to-the-public gospel showcase, which drew a supersized crowd. The event was organized by the Ministry of Culture, Gender, Entertainment and Sport, with Minister Olivia ‘Babsy’ Grange and Reggae Girlz ambassador Cedella Marley sitting up front.

The performance package was first class. By the time we got to the venue, Carlene Davis was wrapping up her set and making way for Wayne Marshall. He instantly connected with the audience, taking them down memory lane with cuts like “Marshall in Town” and “Overcome” before stirring souls with a rendition of The Grace Thrillers’ “Can’t Even Walk”, his humorous “Yardie Christmas” and his sensational hit “Glory to God.”

Kevin Downswell was up next. Vocally impeccable as always, he gave renditions of “I’m Not Afraid,” “A Change is Coming” and “It’s Already Done.” As expected, “I Feel Like Running” (with the Girlz joining him onstage) and “That’s Enough” incited some jumping and rag-waving, ahead of his fresh take on “Goodbye World,” “All the Way/If It’s Not You” and the final number “Stronger.”

Lubert Levy took them to church with “I Feel Like Going On,” “Moving up the King’s Highway,’ “By Force” and “Roll Jordan Roll,” while Kukudoo brought his signature style to the selections “Inna Di Wilderness,” “No Longer a Slave,” and the crowd favourite “Leave People Business Alone (Thanks You Jesus)”.

The show ended with Sister Patt, a commanding soloist who no trouble winning over the people with her fiery energy. She gave performances of “Rock My Soul,” “Massa God”, “Jubilee” and “The Lord is My Shepherd,” remdinding the believers to hold on to their spiritual victory. Sister Patt’s performance provided a big finish for the concert, with Minister Grange, JFF President Michael Ricketts and the Girlz ascending the stage to share in the celebratory moment.