BEST OF 2018: Rosie Murray dishes on her controversial stage role – and other big stories of the year 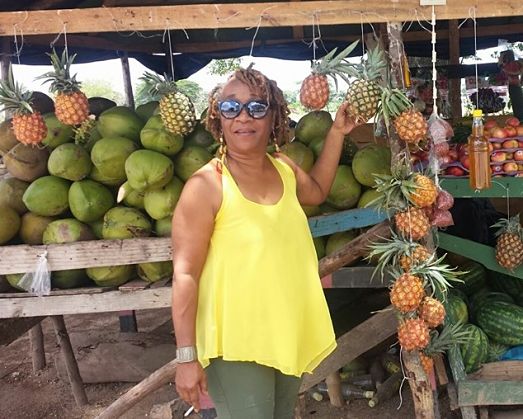 FRUITS OF HER LABOUR: Murray is having the time of her life in her acting career.

IN 2018, Actor Boy and Thespy winner Rosie Murray landed the plummest role in Jamaican theatre (murder convict Mary Lynch) and, unsurprisingly, the production (the well-done one-woman show, The Innocence of Guilt) drew some flak, due to its core subject matter. Was Rosie fazed? How did she pull off such a bravura performance? The veteran actress, who turns 60 in May and is looking forward to more meaty roles in her career, spoke to TALLAWAH about staying true to her craft and what she really thinks of Mrs. Lynch – plus her thoughts on some of 2018’s most buzzed-about headlines.

TALLAWAH: As expected, your latest starring vehicle, The Innocence of Guilt: The Mary Lynch Story, has divided Jamaicans. Why did you want to do this project?
Rosie Murray: I was called for it, before I even saw a script. At first, it wasn’t supposed to be a stage production; it was supposed to be a book and a docudrama. But then the idea came up for it to be turned into a one-woman show, and with my experience they thought I’d be the right person for the role. The way I look at it, everybody has a story, and it would be an honour to honour to somebody else’s story. I know how challenging a one-woman show can be, having done my own [Slice of Life], but I didn’t expect it to be so emotionally draining. It was a challenge.

TALLAWAH: You would have heard some of the negative feedback surrounding the show, largely because of the stigma attached to the court case.
Rosie Murray: I have heard comments, but I tried to true to the script and not allow it to affect my performance. Initially, I was asked if I would have issues doing the show, and as an actress, I see myself playing a role, so it really doesn’t matter to me. People are entitled to their opinions, and she is entitled to tell her story. But the play is also highlighting issues surrounding #MeToo and the #SheTooJamaica movement, which I think are critical and important.

TALLAWAH: Tell me about meeting Mary Lynch. What was that like?
Rosie Murray: Mary and I talk almost daily, because I had to get the characterizations, how she speaks, her mannerisms. Personally, I think she’s a woman who has weathered a lot, and I’m happy that I got a chance to humanize her with this performance. One of the things that upset her was that when the trial was going on, she was depicted in the media as someone who wasn’t independent and never had a voice. So I do think she’s had to weather a lot, and I’m glad that I was the vehicle to give her some humanity back.

TALLAWAH: Let’s dish on some of the other big stories of 2018. How did you react to Buju’s homecoming?
Rosie Murray: Mi glad bag buss (Laughs). I was just sorry that I wasn’t somewhere nearby to greet him. I can’t wait for the first show. “Friends for Life” was my anthem. “Destiny,” “Til Shiloh” and those songs are favourites. The last time I saw him was when Sunsplash had come back, and her wowed the crowd. I was entranced.

TALLAWAH: The Reggae Girlz’ historic qualification for the World Cup took a lot of us by surprise. Didn’t it?
Rosie Murray: It was a surprise for me. I hadn’t been keeping up with their progress. So I was wonderfully surprised, elated. Sometimes we underestimate the confidence and the desire of our Jamaican athletes. Alia also had a great year. Very proud of her.

TALLAWAH: The Petrojam saga involving Dr. Andrew Wheatley was also publicized to death.
Rosie Murray: To tell you the truth, I don’t know much about it. I don’t follow up the politics. I mean, I know the facts but that’s one story I didn’t really follow up.

TALLAWAH: For many of us Jamaicans, in spite of the shocking revelations emerging from the Chucky Brown trial, we’re still hopeful about law enforcement in this country. There are still some good cops among us.
Rosie Murray: I haven’t give up hope. In anything, there is the good and the bad. It’s unrealistic to think that we’ll have it all good. Some lawmen stay true to the vows that dem tek and to the uniform. I’ve come to a place where I have an acceptance of individuals and try not to put them all in one box.

TALLAWAH: So are you a Dalton Harris fan?
Rosie Murray: Oh gosh, yes. Hallelujer (Laughs). He was another one that made me bawl! I think he’s amazing. And when I think of where he’s coming from – All Together Sing, Rising Stars, the issues with his mother – you see the growth and the transformation. He’s come a long way.

Email ThisBlogThis!Share to TwitterShare to FacebookShare to Pinterest
Labels: Best of 2018, Do I Smell a Controversy?, Leading Ladies, Rosie Murray, Talking Theatre