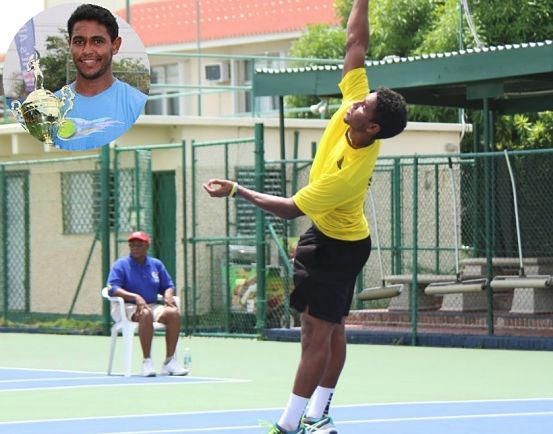 GAME PLAN: "My goal is to break into the top league and get to the Grand Slam level," says Phillips.

FEW things give Rowland ‘Randy’ Phillips a bigger thrill than being on the tennis court and sealing another victory. “I love being competitive, so I am playing as much as I can,” shares the 24-year-old champ, on location at New Kingston’s Liguanea Club, where he recently earned top honours at the JN Bank Open Tennis Championships, defeating 15-year-old junior standout John Chin in a thrilling Men’s Final.

Coming into the tournament, Phillips was the number one seed and Jamaica’s top-ranked player overall, a ranking he snatched sometime ago from arch-rival Damion Johnson, who held the crown for several years.

“It just happened,” says Phillips, trying to explain his emergence to the front of the pack. He feels his numerous outings on the overseas circuit has given him a boost over the local-based players. “I also played in the Davis Cup, while these guys play mainly in the local tournaments. I play internationally so that gives me the edge, I guess.”

A graduate of the University of North Carolina, Phillips (who stands at 5-foot-8) is based in Fort Lauderdale, where his training regimen keeps him in tip-top shape. “I try to get three hours on court a day,” he says. What’s his pre-match routine? “Before every match I try to relax, ease my mind, don’t do anything too crazy,” he says, with a chuckle. “It’s different playing tournaments here in Jamaica – playing in the evenings, eating at different times. I’m used to playing earlier in the day when I have matches.”

But that didn’t stop him from putting in a masterful performance at the Liguanea Club to add yet another trophy (and the handsome $200,000 cash prize) to his growing stash of accolades. Where does Randy see himself in the next five years? “Hopefully, I would have made some big moves in the international rankings. My goal is to break into the top league and get to the Grand Slam level,” the contender says. “You have to start out in Futures, then move up to Challengers, then you qualify to play with the guys you see on TV. I’m currently in Futures. My world ranking is like 1500, so I have a long way to go.”

At least he’s on his way. And he plans to give back to his homeland. “Once I’ve made some serious moves in the sport internationally,” he tells TALLAWAH, “I plan to move back to Jamaica full-time to play and coach.”