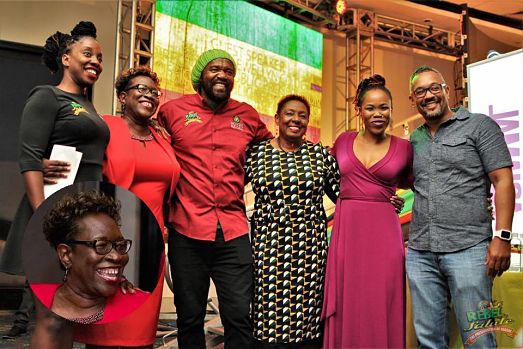 UNITED WE STAND: Llewellyn was in good company, sharing a photo-op at the media launch.

MUSIC is a powerful, addictive force and, as such, artistes and entertainers have a responsibility to wield their power responsibly. Delivering the keynote address at last Thursday’s launch of Rebel Salute 2019, Director of Public Prosecutions (DPP), Paula Llewellyn, implored Jamaican singers and deejays to be positive with their artistry and to use their creative influence wisely.

“As musicians, you have this great talent and you must recognize the power to access and influence many people,” Llewellyn said. “What you say in the music can be so impactful. With great power comes great responsibility, and you must be responsible for the choices that you make.”

As a prosecutor, the DPP emphasized, she is often faced with the task of bringing law-breakers before the court, including persons from the creative industries. “Nobody is above the law. Even though you have this awesome talent, you have to make the right choices. Ignorance of the law is no defence,” she said. “You must know the rules of the game and how the umpire is likely to rule.”

Meantime, Llewellyn amusingly recalled being asked by a couple of women if she could use her position to free Vybz Kartel. At her office Christmas party in December, as everyone was dancing up a storm, “Driver” by Buju Banton came on. “The question was, Should we be dancing? I decided yes. Talent is talent. Once there is remorse, life goes on. I welcome Buju home to Jamaica.”

Llewellyn shares the view of many Jamaicans that though we love our musical superstars, when they run afoul of the law, justice must be swift and allowed to take its course. “Musicians are among our greatest national resources in Jamaica. I boast about our musicians,” she said. “But as a musician you have the facility to get into the DNA of everyone and anyone. I’m all for artistic talent but remember nobody is above the law. We, the police and I, have to do our job, cost it what it will. And as a prosecutor, my back has to be broad to do my duty. I have to be fair but fearless.”

What should our artistes be advocating and aligning themselves with? According to Llewellyn, at the top of the list are good vibes, positivity, and good value systems, especially as our young people are being influenced.

“You have to be careful not careless and be an exemplar of what being ambassador is all about,” Llewellyn said. “When you make bad choices, talent won’t always save you.”