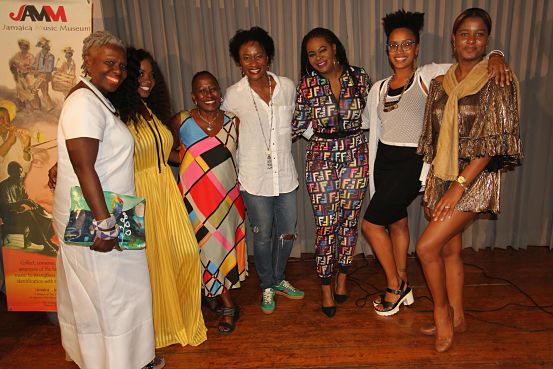 RAP SESSION: This year's series opened with an all-female cast; (Below) Carlene Smith.

According to Smith, because dancehall is seen as poor people’s music, feeding the socio-economic concerns of (particularly) folks from the lower strata of society, it is perennially scapegoated for a lot of the ills plaguing contemporary society. “As Jamaicans, as long as something is not from the background that we expect, it is going to get a fight,” she emphasized. “Too many people are staying on the outside and judging what’s going on on the inside of the dancehall industry.”

Smith, who shot to fame as a performer of the latest dances taking Jamaica by storm, also recalled a particularly painful period for her, which came as she strived to make a name for herself. “I grew up on dancehall culture. It’s what I knew; it’s what I loved, but because I was a brown-skin girl dancing in my skimpy outfits, there were people who looked down on me; because I dared to dance and celebrate my Jamaican culture. It was like how dare I represent dancehall.”

Looking back now, Carlene says she was unfazed by the harsh criticism. “It’s my culture, and I love it, and I’m going to represent it,” she said. “I toured the world as a dancehall representative.”

Meanwhile, as the afternoon discussion took flight, thought-provoking arguments emerged from all angles. While panelist Chris Charles argued that, “Jamaicans make more noise about the transgressions in dancehall than in other spaces,” audience member Elaine Wint firmly expressed her point that “Dancehall cannot exist without a sense of responsibility and accountability.” Robin Clarke is in favour of increased artiste development and less censorship.

Madame moderator Coleen Douglas echoed the views of many when she touched on the issue of power and creative influence. “Dancehall is here to stay,” she conceded. “But [the artistes] have a responsibility to society. To whom much is given, much is expected.”

Over the course of four weeks, this year’s Grounation series tackled the overarching theme “As Free as We Want to Be: Dancehall – A Liberating Ethic.”