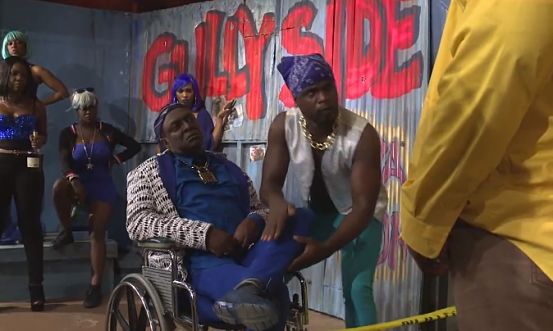 SERIOUS TING: Campbell and Burton and costars in a scene from the play.

THE famous balcony scene in the William Shakespeare tragedy Romeo & Juliet reimagined in Jamaican patois – and set in the Jamaican ghetto, no less – should be super-funny. For proof, look no further than Patrick Brown’ Romi & Julie, the new Jambiz musical comedy, which finds the master storyteller offering an ambitious send-up of the literary classic. The results are indeed hilarious.

Standing in for the Montagues and the Capulets are the Gully and Gaza factions, rival gangs whose members despise each other. Then there’s the rub: leader of the Gazarists, Romi (David Crossgill), has made Julie (a spot-on Keisha Patterson) the apple of his eye. But she’s the precious daughter of Gullyrites boss Papa Don (Glen Campbell, superb), whose confinement to a wheelchair is no hindrance for his larger-than-life persona or his ruthless, trigger-happy approach to dealing with his enemies.

Before long, Julie is sneaking out of the house to meet up with her new paramour, much to the distress of her cousin and guardian Nora (Sakina Deer), who is desperately trying to keep the girl’s father from finding out. And you know the young lovers are only inching closer to hot water.

Still, they persist. Theirs is no ordinary love story. Even an obeahman is brought into the mix for his sage advice and to seal their union. Campbell gives another flat-out funny portrayal as the mysterious Baba, whose specialties include “sending wifey to foreign and matey to hell.”

Rounding out the main cast are stage veterans Courtney Wilson (as Romi’s sidekick, Fatta) and Kevoy Burton as Papa Don’s right-hand man Tyrone, and later as the interesting Thomas Toad, who Julie’s father really wants her to marry. She’d rather drink rat poison.

We all know how Shakespeare’s popular play ends, but Nairne and Brown and the competent cast have turned that narrative on its head, with a spoof laden with the kind of laugh-out-loud comedy that Jambiz regulars expect. Our only quibble: the musical element, particularly the original songs, are not spread evenly throughout the show, creating a slight imbalance.

Even so, theatregoers in the market for a bellyful of laughs, solid entertainment, can’t go wrong with Romi & Julie. And for this particular show at Centrestage, the balcony chairs are probably the best seats in the house. Tyrone’s Verdict: B+