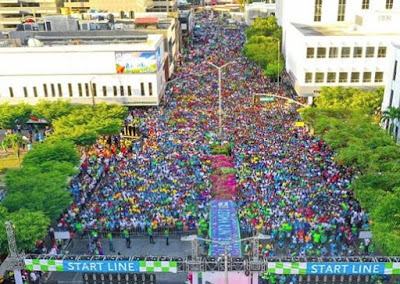 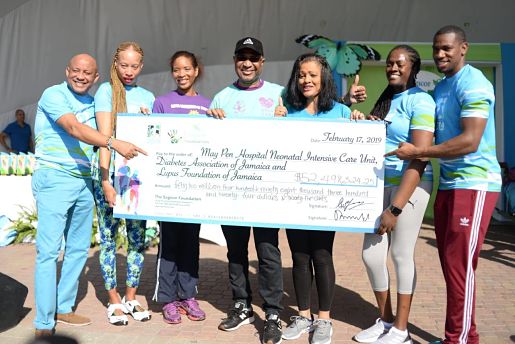 HENRY Thomas did it again. Two weeks after besting a field of over 1200 runners to win the Heart Foundation/Crystal Spring ‘Run for Your Heart’ 5K, the superfit 24-year-old athlete gave a repeat of his stamina-rich performance to win the 2019 Sagicor/Sigma Corporate Run in New Kingston on Sunday morning.

Thomas, a member of the UCT Steppers, won in a time of 17 minutes and 39 seconds. Perennial contender Kemar Leslie (Rainforest Seafoods) was second, while 22-year-old JC old boy Kosiani Dunkley (Tax Administration of Jamaica) placed third. On the women’s side, French-Jamaican runner Elizabeth Mondon was fastest, finishing in 21 minutes and 28 seconds. Second-place was secured by Kelly-Ann Beckford while Jozanne Harris claimed third.

On a brilliant morning at the Emancipation Park, as hundreds of athletes flocked to the various booths for refreshments, Sagicor announced that they had surpassed their 2019 fundraising target, raking in an impressive $52.5 million to benefit their chosen charities: the May Pen Hospital’s Neo-Natal Unit, the Lupus Foundation and the Diabetes Association of Jamaica.

Meanwhile, awards were also presented to the top participants in the Walk category. On the Men’s side, Duell Allen of Shizzle Fit took top honours, ahead of Gladstone Miller (2nd) and Lenworth Hunter (3rd). Best among the women were: Anna-Kay Swaby (1st), Olivia McKoy (2nd) and Paula Sinclair (3rd).