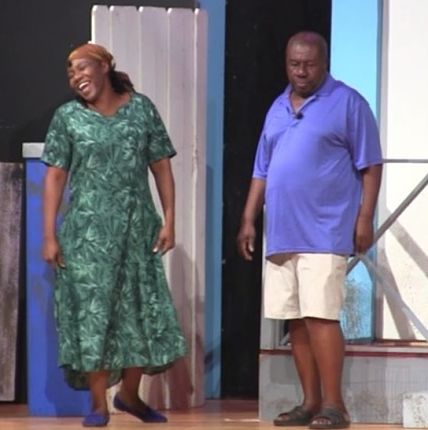 'ENA' EVERYTHING: Reid is amused but Samuels is not in this scene.

Sharing such a tiny communal space, the five residents hardly have the luxury of harbouring secrets. Consequently, the yard is a hotbed of conflict, fertile ground for meddlesome gossipers like Ena, a carry-go-bring-come extraordinaire, to thrive.

Unsurprisingly, she is in constant scrapes and verbal clashes with the others – chiefly Mas Benji (Oliver Samuels, terrific), the 70-year-old landlord whose efforts to collect his monthly rent easily run up his blood pressure.

56 East Avenue is also home to Jah D (Dennis Titus), a devout Rastafarian who runs an ital food establishment in the community and Ena’s dream lover. Never mind that she is still shacked up with common-law husband Jeremiah (Volier Johnson), a hustler whose goods-for-sale are not always acquired by honest means.

Rounding out the solid five-member cast is Merdel (played by Lakeisha Ellison), a nice Christian girl pursuing higher education while holding down a steady job. Ambitious and well-liked by the men in the yard, she is the bane of Ena’s existence. Smartly, Merdel always takes the high road. Hard to believe, but Merdel, like almost everybody else, is concealing something dark from her past.

But this is 56 East Avenue, where nothing remains hidden for very long. And once the play hits its explosive climax, members of the audience will have to take cover.

Envy, pride, dignity, karma – it’s all explored here with ample wit, wisdom and keen observations about Jamaican life then and now. A superior product to Frenemy, Samuels’ last offering, 56 East Avenue is a most entertaining place to be. Tyrone’s Verdict: B+