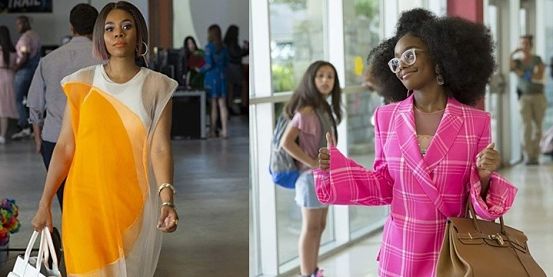 FUNNY GIRLS: Hall and Martin as they appear in the new big-screen comedy.

SAD but true: success is no guarantee for happiness. Jordan Sanders (Regina Hall), the central character in Little, is a perfect example. Attractive, powerful and very wealthy, she runs her own tech company, employs a sizeable staff and has graced the prestigious cover of such magazines as Wired. But Jordan is a grumpy, unhappy woman, a boss from hell who bullies and belittles her employees, including her shy, well-meaning personal assistant, April (Issa Rae, superfunny).

By all appearances, Jordan is cut from the same cloth as Miranda Priestley (The Devil Wears Prada), but she soon meets her comeuppance. When she insults a little girl who has a few magic tricks up her sleeve, a spell is cast and Jordan is mysteriously transformed into her adolescent self (terrific newcomer Marsai Martin) and is made to go back to school.

What subsequently plays out is a hilarious sequence of events which gives Jordan a fine education about the golden rule – while vividly demonstrating how timid birds like April can finally learn to soar like an eagle.

Co-writers Tracey Oliver and Tina Gordon (who directs) clearly know a thing or two about women’s experiences in the vicious working world, not to mention what it’s like to be classified an angry Black woman. Where does this pain come from?

Given the magic/fantasy/sorcery angle, the comparisons to last month’s laughfest What Men Want (in which Taraji P. Henson can hear men’s thoughts) are inevitable. But Little is way more instructive, tacking such themes as workplace bullying, overcoming self-doubt and how to rise from misfit to star of the show. Tyrone’s Verdict: B+

Email ThisBlogThis!Share to TwitterShare to FacebookShare to Pinterest
Labels: At The Movies, Comedy, Current Cinema, Flick of the Week, Movie Reviews, Regina Hall