2019 MIDDLE MANAGERS’ CONF: Nuggets of wisdom from the experts 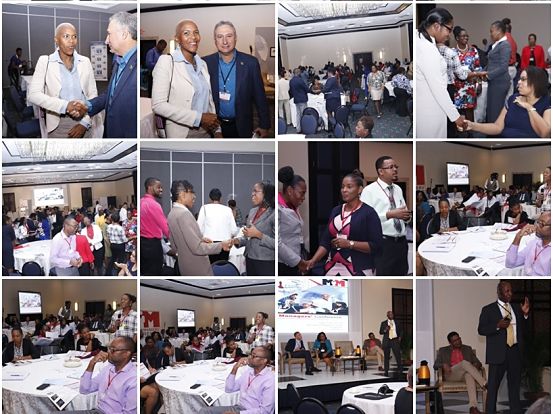 THE MAIN EVENT: The conference offered a splendid opportunity for networking and business connections.

>> Being a CEO for 25 years and counting, says Peter Melhado, has been about adapting to roles and adapting to new things. Not only has he learned to be more precise and well-prepared for whatever he’s doing, the ICD Group President and CEO has also become more “super-analytical” over time. “Being a leader is equal parts teacher and learner,” he says. “Whenever you’re not being authentic you’ll have a hard time being consistent and trustworthy.” Melhado outlined five things his experiences have taught him about being a team leader:
1) Get to know your people first and foremost. Nothing trumps that.
2) Prepare, prepare, prepare. It’s a big part of moving up the ladder.
3) The further up you go, the less feedback you get. Be vigilant.
4) Let go of the outcome.
5) Be brutally honest with yourself.

>> For Grace Burnett, moving from the legal fraternity and the insurance industry to the corporate world (she’s now the CEO of GraceKennedy Financial Group), has been a journey replete with empowering, life-changing lessons. What’s paramount for her, she told her rapt audience, is thinking B.I.G.
1) Be authentic “Each time you’re moving towards your dream without compromising, you’re winning,” she said, quoting Michael Dell. She’s also a fan of Steve Jobs (“Don’t let the noise of others drown out your inner voice.”) and Brian Tracey (“Be the type of leader people want to follow voluntarily, even if you had no title or position.”)
2) Inspire Management, Burnett believes, is about persuading people to do things they don’t want to do; leaders, on the other hand, inspire people to do things they never thought they could do.
3) Grow Says Burnett, “Before you’re a leader, success is about growing yourself. As a leader, success is about growing other people while growing yourself.”

>> Rochelle Cameron, always a hit with her audiences, closed out the conference with a refreshing and informative session dubbed “Building and Unleashing Breakthrough Networks.” She urged attendees to look the part and act the part. “When you walk into a room all energetic, people are immediately drawn to you, that confidence,” she said. “Always ask yourself, ‘How am I presenting myself?’” She couldn’t emphasize enough the supreme importance of body language as you strive to make those important connections. “The body language of people tells us so much. It’s much more truthful. The eyes, especially, speak louder than the voice ever will,” noted Cameron (Assistant VP, Jamaica Broilers), who highly recommends the book Presence by Amy Cuddy. “You want your presence to say I own my value and I feel powerful in my value.”