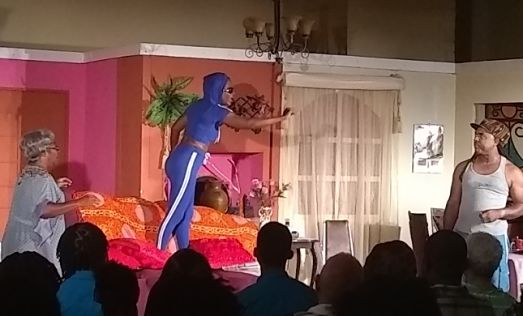 LISTEN MI: Murray, Jarrett and Edwards sharing a scene from the play.

FOR the fast-approaching observance of Mother’s Day, I highly recommend that you go see Face the Truth. An alternately humorous and sobering domestic dramedy, it vividly highlights the perils of spoiling your child, especially when they are long past the age when they should be out in the world making life and fending for themselves. It’s a cautionary tale.

Written by Angela Jarrett and directed by Andrew Brodber, the creative team behind last season’s Something Fishy, the play stars Rosie Murray as Dorothy Norton, a rich 75-year-old maven, who could be accused of being an enabler. Her adult son Ray (Tesfa Edwards) can be described as a deadbeat Rastafarian sponging on his mother quite heartlessly, taking full advantage of her kindness and her soft heart.

Frequent mention is made of Ray’s missing family (including wife Jasmine), a Mr. Drummond, who seems to hold a special place in Miss Norton’s heart, and a Pastor Finley, a fit and sexy white man who has Babs hitting the early-morning jogging trail to catch his attention.

But the action primarily unfolds inside Miss Norton’s living room (in Hope Pastures), which becomes a heated battleground as Babs and Ray finally square off in response to the free-loading situation that has escalated.

Jarrett knows people, and this wisdom and understanding of human relationships manifests repeatedly in her dialogue-heavy script, which Brodber and the three-member cast and crew bring to rousing life – in spite of minor technical flaws.

You’ll laugh, you’ll cuss, you’ll be entertained by this frank and true-to-life account of dysfunctional family dynamics and ferocious greed. Tyrone’s Verdict: B