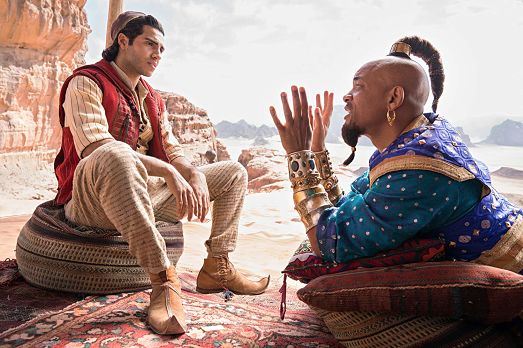 COUNT ON ME: Smith's Genie having the talk with Aladdin (Massoud).

BE honest: if a genie granted you three wishes right now, what would you ask for? For so many of us, the first request would, naturally, be to make all our problems disappear!

In Disney’s new live-action update of Aladdin, a colourful, magical treat in 3D, our titular hero (talented newcomer Mena Massoud) is much more specific. But, as he ultimately learns, you can’t escape your destiny and, more often than not, the journey is a bumpy, treacherous ride.

Directed by Guy Ritchie (known for much more gritty cinematic fare like Rocknrolla), the movie is also a wonderful slice of nostalgia. You feel like a kid all over again, reconnecting with this Arabian tale of true love, royalty and loyalty.

Aladdin, accompanied by his trusty monkey, Abu, is coerced by the evil Jafar (Marwan Kenzari) to go into the Cave of Wonders to retrieve a lamp. Having completed the task, Aladdin (who discover a mysterious magic carpet) finds himself trapped inside the cave. Curious, he rubs the lamp, releasing the big, blue genie, played with no shortage of pizzazz and cheeky fun by Will Smith. 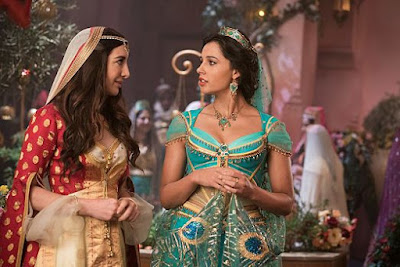 What Aladdin, an orphan and an artful thief, really wants is to make himself worthy of the sultan’s beautiful daughter, Jasmine (Naomi Scott), who, with the help of her lady-in-waiting Dalia (Nasim Pedrad), is determined to protect her aging father (Navid Negahban) and their kingdom from the wiles of the power-hungry Jafar.

The forbidden romance that develops between Aladdin and Jasmine is what gives the movie its pulse – not to mention the genie’s life-of-the-party antics and the infectious musical numbers.

As with so many of Disney’s offerings, the movie holds valuable lessons about friendship and family, but none more telling than the simple fact that though people don’t always see the real you when you’re ‘royalty,’ real character always shines through. Tyrone’s Verdict: A-

Email ThisBlogThis!Share to TwitterShare to FacebookShare to Pinterest
Labels: Current Cinema, Disney, Flick of the Week, Movie Reviews, Will Smith