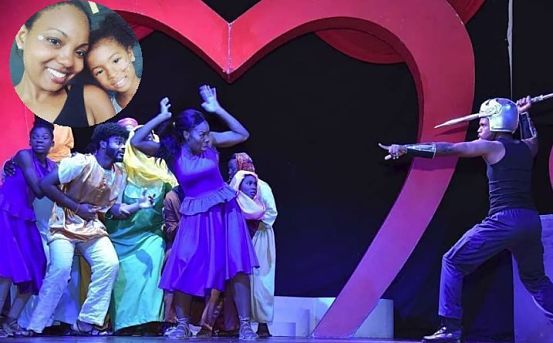 STAGE PRESENCE: “We want to produce more of these shows,” says Smith (inset), with one of her young students.

YOUNG arts-based company First Dance Events, producers of Jesus Christ Superstar, which recently wrapped a successful two-night run of the Broadway musical at the Courtleigh Auditorium in New Kingston (after a stint at Iberostar in Montego Bay), say they have every intention of capitalizing on this sweet success. Primarily, they want to use lessons from the experience as a catalyst for orchestrating more large-scale productions of this kind.

“The feedback has been amazing, and we were pleased with the turnout. We were expecting more people in Kingston, but we were close to sold-out when we played at Iberostar,” says chief producer Jody Marie Smith, who runs First Dance Events with producing partner Andre Dixon. “Persons have told us that they enjoyed the show immensely. Many of them said they couldn’t believe the quality of the production and the quality of the acting and vocal performances.”

Both Smith and Dixon are from Montego Bay. Almost the entire cast and crew, including director David Tulloch, also hail from the West. “We are all Montegonians,” Smith tells TALLAWAH, beaming.

First Dance Events, now six years old, is all about the arts, operating a dance studio that offers classes for adults and children. Each year they put on a recital in June and an end-of-year showcase in December. Now, given the success of their first commercial production, doing a musical will be an annual thing.

“We want to produce more of these shows. We are branching out, and adding an annual musical to our calendar is part of the growth strategy we are looking at,” says Smith, who acquired the official Broadway rights for staging Jesus Christ Superstar, a pop-rock sensation by Tim Rice and Andrew Lloyd Webber that follows Christ and Judas and the disciples, and climaxes with the Crucifixion.

Smith says the opening of a Kingston branch of FDE within a few years could be on the cards. “After six years, we feel accomplished,” she notes, “but there’s much more to come.”

Tulloch, who wouldn’t mind working with them again, has nothing but high praises for Smith, Dixon and the rest of the team. “It’s good to see them branching out,” he tells TALLAWAH. “It speaks to their boldness, and the effort has to be commended.”