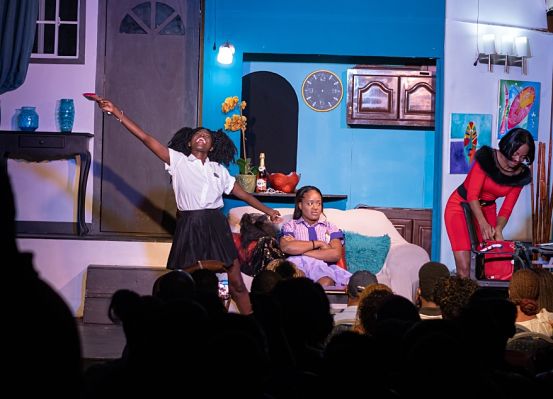 HOME SWEET HOME: Jackson, Fletcher and Davis in a scene from the play.

IT’S almost midnight. Do you know where your daughter is? A child suddenly gone missing is every parent’s worst nightmare. But quite often, according to experts, these disappearances are the result of parental negligence and a dysfunctional home environment. The plot thickens, however, when your headstrong kid has lost herself in the world of cyberspace and social media and has started offering TMI. That’s simply a recipe for catastrophe.

Fabian Barracks, never one to shy away from exploring uncomfortable, sometimes disturbing, issues affecting contemporary Jamaican youth, takes an unflinching, brutally honest look at these matters in Ananda Alert, his latest theatrical offering that delivers his signature blend of a strong cast, a solid script and no shortage of high-wire domestic drama and comedy. It’s great entertainment and life lessons in a humorous package.

Crystal Fletcher stars as Shaday, a teenage high achiever whose posh single mom Dianne (Aisha Davis) is too caught up in her career-woman-on-the-go antics to notice that her daughter, though very mature and accomplished, needs her mother’s attention. Wise Grandma Pearl (Gracia Thompson) takes an interest in the girl and regularly chides Dianne about her negligence, but it’s to no avail. Dianne seems way more interested in her hunky new neighbour Calvin (André Bennett), a bachelor and man of few words who is very good with his hands. Lucky for Shaday, she has her BFF Fendi (Shantol Jackson, hilarious) to come over and keep her company and keep her laughing. Fendi brings along Suzie, a mannequin head that she alone can communicate with. Smartphone and social media savvy, the girls are very active online, meeting boys and being young, happy and free. Maybe a bit too free.

When Shaday fails to return home one evening, her disappearance sends a wave of panic through the household. But what does Fendi know about her friend’s vanishing without a trace? And is there more to Calvin’s sweet-and-friendly-neighbour act?

Credit to Barracks’ knack for storytelling, the onstage action and its twists and turns keep you intrigued, as the plot heads towards its explosive climax. The loose ends wrap up a bit too neatly in the end, but viewers are left satisfied and the play’s message hits home. Tyrone’s Verdict: B+

>> Interview: Fabian Barracks talks about his mission, his struggles and opening the Barracks Theatre