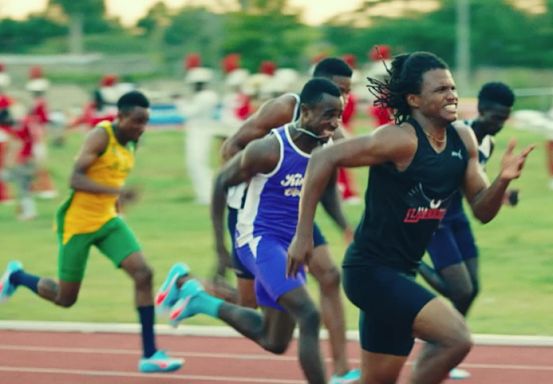 STRONG FINISH: Elliott stays ahead of the pack in this scene from the movie.

YOU’RE young, talented and destined for greatness, but your path is littered with obstacles and distractions – both human and non-human – that threaten to derail you and extinguish your light. Akeem Sharp (newcomer Dale Elliott in a star-making performance) can certainly relate.

The rising high-school runner at the centre of Storm Saulter’s well-made and hugely entertaining new feature Sprinter, Akeem is the kind of likeable chap who just needs some guidance to help him fulfil his enormous potential and become the next Usain Bolt.

That’s where Coach Miller (David Alan Grier), the tough but nurturing Lazarus High School mentor, comes in, pushing Akeem to stay focussed and dig deep to deliver consistently outstanding performances on the track. Star girl and supportive teammate Kerry Hall (Shantol Jackson) also cautions him about staying on the straight and narrow and keeping his eyes on the prize.

But that’s easier said than done. Akeem comes from a broken home, raised by a struggling single dad (Dennis Titus) after his mom (Lorraine Toussaint) relocated to the States to make a better life and send money back home. He misses his mother.

After a falling out with his dad, Akeem’s older brother Germaine (Kadeem Wilson), a former track star-turned gangster, takes him under his wing but, as he soon realizes, that kind of environment is not for a young man who wants something out of life, who really wants to represent Jamaica in international competition. It’s a tough lesson Akeem ends up learning the hard way.

The theme of sport’s unifying power is juxtaposed against the ugly underbelly of crime and gun violence and its devastating impact on national and family life – an interweaving of complex subject matter that Saulter handles with directorial finesse. Still, the real joy of Sprinter is the combination of youthful zeal, talent and the lessons of one young man’s fascinating learning curve. Tyrone’s Verdict: A-