THE ENEMY WITHIN: Behind the Pulpit brings church and gender politics into sharp focus 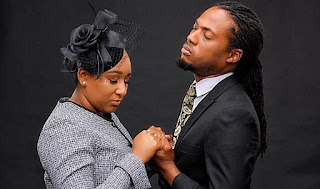 FOR as long as there have been jobs – from the political sphere to the scientific world – the idea of a woman filling a role considered traditionally male has been frowned upon. Even in the church.

As action heats up in the electrically charged gospel drama Behind the Pulpit, Pastor Patricia Nobles (a splendid Petrina Williams) is elevated to the rank of bishop, in the wake of the passing of Bishop Grant.

Not everyone is happy for Patricia and her appointment, and that includes her own husband, Troy, played by Brian Johnson, who wrote the script and co-directs with Akeem Mignott.

The bubbling cauldron of resentments and jealousies, demands and ultimatums, and religious hypocrisy swells to volcanic proportions, making this one of the most explosive productions you’ll see at the theatre this year.

The Nobles, both young working professionals, seem to share a close-knit relationship that only needs a child or two to make the union complete. But Patricia’s new job reveals the gaping cracks in the marriage, and secrets threaten to come tumbling out of the closet.

Troy’s friendship with Brother Mark (played with roguish charm by Miguel ‘DJ Rebirth’ Williams) adds another complex layer to the whole thing. And let’s not even get started on Sister Imogene Grant (Samantha Thompson, terrific), the late bishop’s widow, who is as devoted and matronly as she is overbearing and manipulative.

Will the new bishop get the support she needs to take the church forward in the face of financial mismanagement and other weighty matters? Will her marriage survive the stress and strain?

Mignott and Johnson make a dream team of collaborators, and though their play could do with a ten-minute editing job, it’s a fantastic effort. They certainly know how to captivate their viewers and pull strong performances from actors. Johnson, meanwhile, is having a wonderful run as theatre’s man of the summer.

Unsurprisingly, Behind the Pulpit gets a tad too preachy, but you can’t deny its genuine emotional heft and riveting power as it explores everything from marital dynamics to church and gender politics. Tyrone’s Verdict: B+