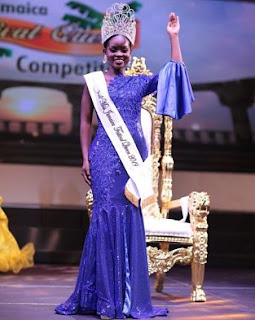 THE proud St. Catherine natives in the house, including co-emcee Dahlia Harris, were over-the-moon excited, when it was revealed that their representative Khamara Wright, a bright 23-year-old from Greater Portmore, had amassed the most overall points to walk away with the 2019 Miss Jamaica Festival Queen title.

The coronation took place inside the National Arena on Thursday night, before a capacity crowd.

Wright, a sous chef and social activist with a culinary arts degree, is the first young lady from St. Catherine to cop the title since Harris last won it back in 1990, almost three decades ago. Wright’s prize haul included a cheque valued at $455,000, the coveted JCDC trophy, among other attractive awards.