Q-&-A: Hugh Douse talks about music with power, Miss Lou’s legacy and what he’s looking forward to most 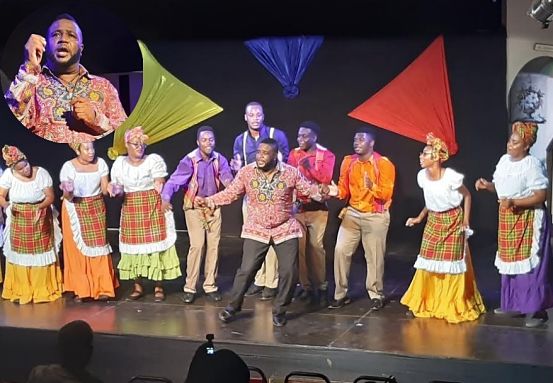 HIGH NOTE: Douse and the Nexus choir putting on a show for concertgoers.

TURNING the big 5-0 in December, Hugh Douse – university lecturer and Artistic Director of the Nexus Peforming Arts Company – continues to do work that immerses him fully in our rich island culture (particularly our music), while giving him myriad opportunities to nurture and mould young talents. Recently, the fruits of his labour was on show as Nexus thrilled audiences with their 2019 concert season. Douse spoke with TALLAWAH about the moment and more.

TALLAWAH: This year Nexus pays glowing tribute to Miss Lou. Will Jamaica ever make her a national hero?
Hugh Douse: Even if it doesn’t happen in our generation, it will happen as long as we keep the legacy alive. We are on the right side of history and we stand to lose a lot if we don’t honour her as we should.

TALLAWAH: How has it been building up the Nexus repertoire over the course of the past two decades?
HD: I started off with songs that had an impact on me as a youth. Then I looked at songs that have meaning, something to say. I believe all singing should carry some meaning. Even the tones and the arrangement ought to carry meaning. And I embrace different genres. My influences [range from] the Jamaican Folk Singers to the Mormon Tabernacle Choir.

TALLAWAH: How can a talented young singer become a member of the Nexus crew?
HD: They can call or reach out to us on Facebook, come in for an audition and we take it from there.

TALLAWAH: Who are the new-generation reggae artistes that get your stamp of approval?
HD: Definitely Koffee. I’ll tell you a story: her mother used to be in Nexus and she used to come to rehearsals as a baby. She’s grown up nicely and she’s very talented. Her musicianship and her energy is right. Our own drummer, Hector Lewis, who works with Chronixx is starting his career as a singer, and there’s an emerging artiste named Felix, who has a wonderful reggae anthem that people can start listening out for.

TALLAWAH: You’re turning 50 in December. Congrats. Has Hugh Douse achieved all that he set out to?
HD: No (Laughs). I’m still working on an MPhil, and when that is finished I hope to go away to do a PhD. I still want to take Nexus to that next level, but we’re on that journey and I’m joyful about that.