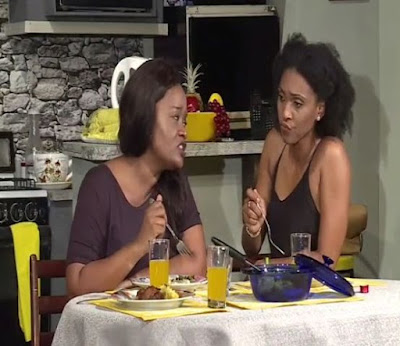 LONG STORY SHORT: Rawlins and Deer is a scene from Brown's latest.

WHAT secret or what episode from your past would you give an arm and a leg to keep buried? That’s the kind of situation Eloise (Nadean Rawlins) is grappling with as action heats up in Straight Jacket, the slyly funny and thought-provoking new play from Patrick Brown. Rawlins leads an all-star cast tackling themes of trust and betrayal, pride and dignity, parenting and paternity.

Ellie, who designs women’s clothes from home, and her hubby Greg (Glen Campbell) who brings home the bacon, are so in love they’re the kind of couple you love to hate. Ellie’s best friend and neighbour Shonda (Sakina Deer), who is battling severe depression (etc. etc.) spends most of her time at their house. They are a through-thick-or-thin trio who have each other’s back.

With their eight-year-old son (affectionately called ‘Papa’) away spending time with relatives, it’s just the adults at the house living it up. And Ellie and Greg are making ample use of the privacy they’ve been granted.

Why are shadows always lurking, ready to extinguish people’s happiness? When Ellie invites to dinner an old high-school friend visiting from Texas (Courtney Wilson as Jerry), it’s an epic mistake. Before long, the real reason for Jerry’s visit becomes painfully clear, recalling a chapter from Ellie’s past that borders on scandalous.

In no time, certain shocking issues are being raised, chief among them: Could Jerry be the real father of Ellie’s son? Did she knowingly give Greg a ‘jacket’? What really happened in that hotel room almost nine years ago?

To say the least, Greg is devastated. With his performance, Campbell makes you feel Greg’s hurt, especially in scenes where he turns to vodka. Wilson, meanwhile, gets to show impressive range, playing a slippery eel who readily admits that life has not been kind, while Deer’s Shonda is as sharp and seductive as she is loony and playful.

As a mother blindsided by a turn of events that could lead to the collapse of her marriage, Rawlins is terrific, bringing her trademark conviction and commanding presence to the stage. In a nutshell, Straight Jacket is a must-see. Tyrone’s Verdict: A-