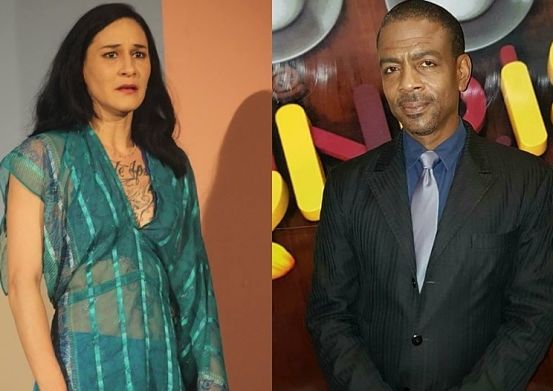 SHE & HIM: Lowe and Campbell play a couple trapped in a rocky marriage.

“YOU’RE not even a man!” Wilton Chambers (Rodney Campbell) exclaims, getting riled up now. He’s speaking to God (Sheryl Hylton-Parker), who has appeared to him in a dream-like sequence as he battles for life in a hospital room following a vehicular accident.

An abusive and unfaithful husband who believes a woman must know her place, Wilton has to lot to answer for, and God (looking fabulous in her blush-pink dress and Nubian headpiece) doesn’t make fun with him.

Their profound and revelatory verbal sparring is one of the highlights in Feminine Justice, an engrossing, strongly acted and well-staged remount of the Basil Dawkins hit play, directed by Peter Abrikian.

Abrikian is more known for his work behind the scenes (stage management, in particular), but for a relative newcomer to the director’s chair, he makes some effective choices that lend the production a tight flow, while coaxing spot-on performances from the cast, particularly Campbell, who is dynamite, giving a richly layered turn as the arrogant psychiatrist and woman-beater who gets a dose of his own medicine.

Maylynne Lowe plays Wilton’s long-suffering wife Vilma (also in the medical field), who gets a taste of freedom and can breathe for the first time in years when Wilton is hospitalized. But should a wife be feeling joyous relief when her husband, though cruel, is at death’s door?

Dawkins’ play is riddled with these and other serious questions, while exploring the frightening idea of God’s judgement, alongside such themes as marital woes, social status, control, pride and forgiveness.

The talented Philip Clarke (a Thespy and Actor Boy winner for 2010’s White Witch) rounds out the cast as Ted, the couple’s gardener/yard boy who is upgraded to husband – and Wilton to house-maid – in a priceless, funny dream sequence. Who says God doesn’t have a sly sense of humour? Tyrone’s Verdict: B+