AT THE MOVIES: Two thumbs way up for crafty, stylish The Good Liar 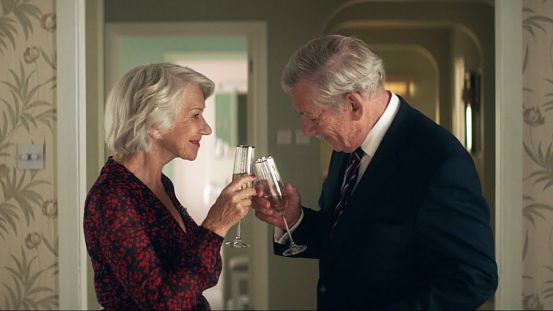 THE COMPANY YOU KEEP: Mirren and McKellen toast to the future.

THE Good Liar is a taut cat-and-mouse thriller that blends intrigue, suspense and razor-sharp performances for a great cinematic event. You are riveted to the very end.

Helen Mirren plays Betty McLeish, a widow and former Oxford professor who longs for “companionship.” She turns to online dating, where she meets Roy Courtnay (Ian McKellen), a single older gentleman who is into finance and investments. They hit it off right away, and before you can say “geriatric,” Betty has moved Roy into her place, having grown increasingly fond of him.

But Betty’s grandson, Steven (Russell Tovey), a doctorate student, feels things are moving too fast between his grandma and this stranger. He tries to warn her, but she quickly dismisses his nagging concern.

When Roy introduces Betty to his accountant and money advisor, Vincent (Jim Carter), he not only invites her into an investment scheme, where she can “double her money in five years” but also to open a joint account – to pool her millions with Roy’s money. That’s when things really start to get interesting.

If only Betty knew about Roy’s double life as a con artist. She would have spotted from afar that these two charmers are a team of swindlers looking to make their next big score.

Stylishly orchestrated by director Bill Condon (Dreamgirls), with a screenplay by Jeffrey Hatcher (based on the novel of the same name by Nicholas Searle), The Good Liar scores points for its great pacing and intricate plotting, weaving a tale of greed and deception and vengeance.

Mirren and McKellen vividly demonstrate why they rank among the most celebrated actors in the business, giving masterful lessons steeped in subtlety and depth, class and craft. Tyrone’s Verdict: A

Email ThisBlogThis!Share to TwitterShare to FacebookShare to Pinterest
Labels: At The Movies, Current Cinema, Flick of the Week, Helen Mirren, Ian McKellen