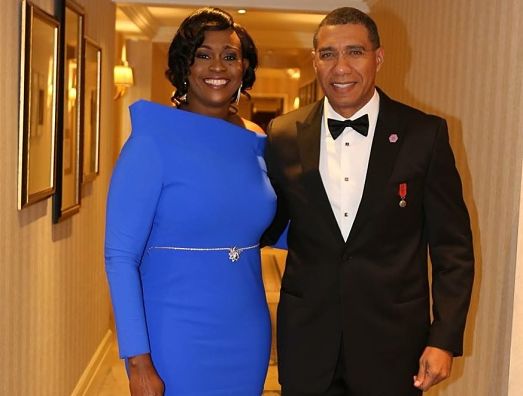 HOTTEST COUPLE: Andrew and Juliet Holness greet the cameras during one of their public appearances.

YOU can say this for Mrs. Juliet Holness MP: she stands by her man. Last Sunday, she told a throng of JLP faithful in St. Catherine: “We lucky we have a young prime minister, a prime minister whose body is tight and firm, who sexy cyaah done… A prime minister who can run, who intellectual and can work… and nuh sleepy sleepy.” Since then, the court of public opinion has been divided over her comments (“inappropriate,” “humorous”), sparking newspaper columns and letters to the editor.

>> FOR
Mark Wignall’s take: “In Jamaica we are used to our male politicians ‘bigging up’ their wives on the political podium… In this instance, a strong young Jamaican woman, who just so happened to be an elected member of parliament and is also wife of the prime minister, has proudly proclaimed that her man, her husband, has the intellect of a sage and the physical hardware to conquer any hill… Politics is a trade show. The message must be wrapped in happy colours, and the delivery presented to earn the best theatrical reviews. Juliet Holness knows this.”

>> AGAINST
Gleaner letter writer P. Chin’s take: “I wonder how Mrs. Holness would feel as a woman, a wife and a mother if her husband spoke about her like that while campaigning, describing her sex appeal and looks as an attribute for representational politics. It might sound funny in the moment, but it was in poor taste, and those who condone the comments are just as bad… Mrs. Holness should remember that she is the wife of the prime minister and first lady. She is a role model that many young people do look up to!”

TALLAWAH’s take: A young and healthy prime minister with the stamina to go the distance in shark-infested waters – and a strong, supportive (and hilarious) wife by his side? Jamaica is very fortunate indeed.

Email ThisBlogThis!Share to TwitterShare to FacebookShare to Pinterest
Labels: Do I Smell a Controversy?, Hot Topics, Juliet Holness, People In The News, PM Andrew Holness